This month's feature in The Virtuous Medlar Circle is the second in my 'Favourite Artists' series.

Lewis P. Morley is a man who lives his dreams as his day job, and plays his dreams after hours. Boggle at the what and why of his 'Tin Toys that Never Were', and empathise with him, if you're the soppy type, when reading the interview in which I pin him and his creations to the Board of Inquiry and shoot questions at him about art and Art, fetishists and curators, toys and Komics and adulthood, and just what he thinks he's playing at. He didn't squirm once, but Yohoho! See him bristle!

As to those (what others would call 'amazing' but that word needs to be put in a rest home for flogged words for a century or two) 'never-were's', you've got to see them, and I'm not giving you a peek in this posting.

The interview didn't go into all that horrible personal stuff that is so popular now (except to reveal his obsessional love for the small but extremely curvy Peregine Besset). I do think that there should be a carnivore-infested swamp between a man's personal life and what is exposed to the gawking crowd. So here and now I can only take you into the bedroom he shares with his 'soul-mate' Marilyn Pride where you can gaze at their bed from several angles. 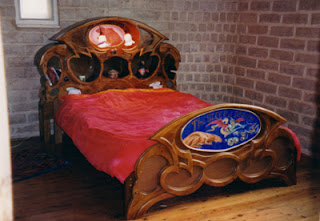 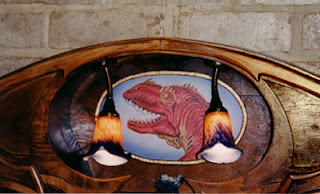 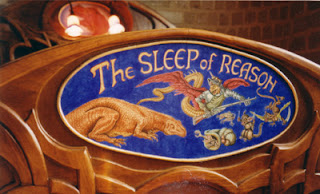 And now have a peer at their dunny door. 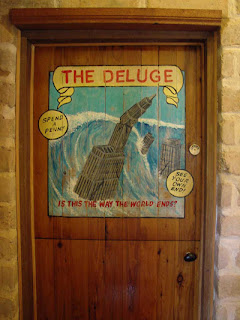 He based the paintings on Marilyn's paintings, but designed, made, and painted the bed and the door.

As for the effects of their sleep of reason, words to the wise are lacking in the presence of a photograph. 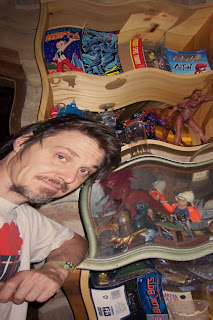 'Tin Toys that Never Were' - An introduction to and interview of Lewis P. Morley