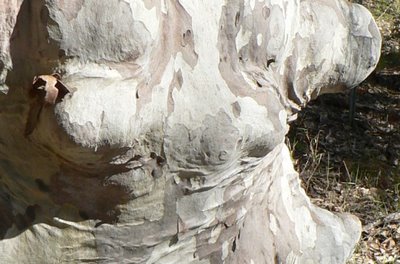 Posted by anna tambour at 9:51 pm No comments:

The chopping block was falling apart, so it got chopped into firewood, 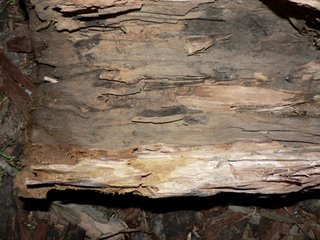 and out tumbled some occupants, 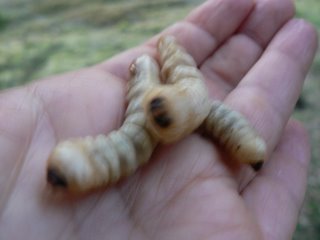 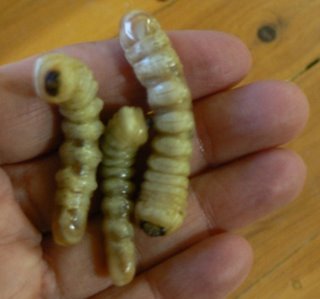 Just think if what we ate was as easily seen.

A happy twist in its life for one of the grubs, which was put back on one of the split pieces where it burrowed into the wood again; and if life continues as it should for this witchetty grub, it will end its days as, I think, a hawk moth.
Posted by anna tambour at 10:19 pm 10 comments:

She's so bloody honest and she's always tried to be constructive in her criticism, but what I love the most about her is: she's never been afraid to enthuse about what moves her.
Posted by anna tambour at 9:29 pm No comments:

To quaff a book

What's the difference between an oenologist and a reader? A vintner and a writer?

'It is only the wines of Sauternes that reach heights of greatness, all thanks to a fungus, Botrytis cinerea or noble rot . . . Years ago, my parents visited the vineyards of Bordeaux and my father was asked if he would like to try one of these botrytised grapes. He said it was so sweet it made his teeth ache . . .'

So wrote Rachel Simhon recently in the (UK) Daily Telegraph . Yet she could have written about acid adjustment of wines using sulphuric acid, a popular topic amongst vintners.

Nothing about, say, nonionic surfactactants or indicators for ammoniacal nitrogen. Nothing in public about who's likely to buy what, what trends to anticipate and package and pitch for.

Although wine is chemicals and craft and hygiene and high finance and government regulations and packaging, the industry of wine-making keeps that sort of talk behind the doors of the producers (including the producers of surfactants and advertising).

Wine, to the public, isn't craft and business, but art and sex: 'aromatic and packed with juicy black-fruit flavors and spice, and with wonderful balance and palate-refreshing acidity. Its bold, ripe fruit . . .'

There are wines described for all tastes: 'the gentle handling the Pinot Noir grape requires . . .'

And of course, there are those who aspire to 'pedigrees'.

One recent article about wine in the San Francisco Chronicle says it all, beginning with 'It was love at first sight'.

Yet here's another article that is important to vintners, but isn't flashed at any oenologists' watering hole : Multiresidue analysis of seventeen pesticides in wine by gas chromatography with mass-selective detection.

When it comes to the distinction between art and craft, myth and reality, there is possibly no greater example than Sauternes. One Chateau de ---- states, 'This is a very expensive goal. . . In other words, the juice coming out of the winepress must contain 340-350 grams of sugar per litre.'

Now, I can tell you from experience that this a load of large-animal droppings, having picked at one of the greatest of all these Chats. It was a time when I was looking for casual work and almost got a job picking mushrooms in a cave in France. Only short people could do the work, and it would have been an 'experience', but then this came up, another temporary thing, but what an experience this was.

Picking only the grapes with 'noble rot' upon them is a painstaking job. All morning we picked carefully, the smattering of foreigners being hawk-eyed by ranks of local women, experts in bedroom slippers. There was tension in the air. Finally a car arrived and the owners, an overdressed couple, emerged to inspect a row or two as if there had been no French revolution. When they got in their car and instead of proceeding to the Chateau, drove off the estate, the order went out from the senior bedroom-slippered. 'Vite, vite! Pick everything you can!'

So we picked all we could and that night, we were guests of the young assistant manager and his girlfriend. It was a marvellous, romantic evening. They made dinner for a crowd of us. The meal was boiled, unstirred, stuck-together spaghetti with nothing on it, and cocktail sausages from a can, dunked in the boiling water, and for dessert, plastic tubs of yogurt. Then we were treated to young wine served from washed-out bottles of aperitif—I remember one with an artichoke on it--absolutely delicious. Then the assistant manager excused himself to go to work. He went to add to the developing wine the sugar that the grapes are supposed to have, as that is one of the reasons the stuff costs what it does. He asked us not to tell, as it's a secret, you know.

So much for vintners and oenologists. What about writers and readers?

'We are gluttons of experience, vicarious or otherwise, and we constantly hunger. Not necessarily for the new, not always for the familiar, but rather for everything, slaves of the constant need to assuage our appetites. We live secret lives in our words, creating fiction from the raw materials we cannot help but seek and savor. And then we need to expose ourselves.'
— Dean Francis Alfar, Writing: A Blog Abecedary

Alfar makes me hungry to read when he says that. I mention this because while book lovers and wine lovers have much in common, so much talk in the public sphere when it comes to books centres around writing, which I find as delicious as talk about how to suss out pesticides in wine.

I do think there's more art and magic and romance and sexiness in stories and books than there is in wine, and if there isn't, well:

'I found reading in bulk, that I was developing a dislike for both the "well-made tale" and the fleeting "impression". Manuals on how to write short stories, and much criticism, stress unity of form, stress that only one thing should happen, that an episode or incident should be developed, or an emotion caught, with no space for digression, or change of direction or tone . . . Many of the stories in this collection break all the rules of unity of tone and narrative. They appear to be one kind of story and mutate into another. They make unexpected twists and then twist again. They pack together comedy and tragedy, farce and delicacy, elegance and the grotesque.'
— A.S. Byatt's introduction to The (excellent) Oxford Book of English Short Stories

At conventions where readers and writers mix, 'nuts and bolts', 'craft' and 'business' spread through conversations and sessions like rampant, unnoble rot. Indeed, some trade writing for vintners is more the stuff of ripping yarns, such as these lines by Cyril Penn:

'Pierce's disease is a bacterial infection transmitted by insects and can quickly kill entire vineyards. The threat has received additional scrutiny in recent years because it can be spread by the glassy-winged sharpshooter, which is capable of flying long distances.'

As for the state of being a 'writer', almost anyone worth an imagination would, I hope, prefer to meet a glassy-winged sharpshooter. The image of 'writer' has reached a crassness point so great that a current ad in Australia seeking women customers for some bank includes the line 'She writes short stories.'

Rhys Hughes hilariously discussed writers in this thread. Here's part of what he says.

'I was in a dance club two nights ago and a man came up to me and introduced himself as a writer. Then he shouted in my ear, "The one thing I hate about dance clubs is that you can't have a good conversation about literature in them!'

Have you seen the Virtuous Medlar Circle, Irresistibles, Quotes?

If you haven't (and approximately the whole human population minus a few dozen souls have not) you might like to know that I update this online magazine-of-sorts on the firstish of each month with a new edition, as part of my other site.

Being the daughter of a man who died having saved not one thirty-year-old can of shark repellent but two, NOTHING is ever dumped. All entries are archived for your enjoyment.

Passionate, irreverent, funny, intriguing, maddening; full of other people's essays, stories, poetry, views, and preoccupations. Full of links that can take you further than NASA can even image. 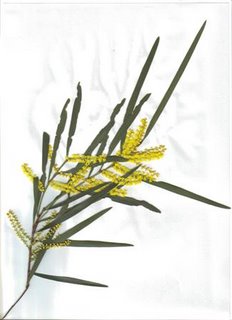 One of the joys of the Australian bush is the flowers of winter. Opportunism sparks the blooming of many plants, and we have had decent rain this year, so the bush here on the southeast coast is quite painterly. Last month, the dominant colour was Danish-butter cream, now American-butter yellow.

Rime sharpens every leaf on the ground these mornings, yet the air is perfumed with many wattles. Acacia, as they are properly called, is a genus with many species. As the Australian National Botanical Gardens states, "There are some 1350 species of Acacia found throughout the world and close to 1000 of these are to be found in Australia."

There are many species here, all full of personality, to their very smell. They range from honey-butter to Concord grape. Some ooze a deliciously tannic exudance that looks exactly like artists' gum.

As for the flowers, "Individual flowers are arranged in inflorescences that may be either globular heads or cylindrical spikes."

Inflorescence is a word that intrigues me.