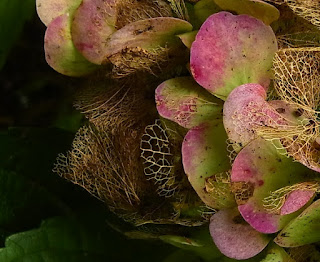 An escapee from the world of dull gardens, this hydrangea's personality blossoms.

Deptford Pudding is a place that illustrates perfectly that (literally) untold modern advice: don't say anything unless it's really worth telling.

So the postings are sparse, and each one is absolutely delicious –  the most recent one —  Where Time Stands Still? — is typically adventurous, foraying into history, people, food, curiosities and treasures recognised as such by those with real taste. In this one post, for instance, Barbara Cartland is mixed with clairvoyancy, horned cattle, flight, a dubiously productive Finch, fascinating photographs as usual; and for puds, a typically scrumptious and curiously named salivation-trigger that will work if you make it.


I've often wanted to recommend this site, but somehow haven't because I worried about it not being someplace you can visit every day. But that's silly. Start exploring and you'll find many treasures, including a brilliantly enthusiastic and learned exploration of medlars, and similar delights exposed for your delectation: bloaters, liquorice, rhubarb …


Read also, Deptford Pudding's explanation about the perpetrators of this blog, which I've trimmed down to these details: "I’m David Porter, a freelance photographer living in South East London. The co-author of this blog is Clarissa, a great cook and a stylist, and (she’d like me to add) a great artist!"
That's a lie. There's much much more to them than they admit. For one thing, they are historians you can depend on. And another tiny detail that is particularly irksome. Millions of people could legitimately brag about themselves as "writers" if they wrote an nth as well as the fine essays in Deptford Pudding. I hope that one day, this becomes a book that I can also recommend. I would dearly love to indulge myself by reading it in the bath. In the meantime, I raise my spoon to David and Clarissa! Ahhhh!
Posted by anna tambour at 11:35 am 2 comments:

Goddess of the Sea and Monsters from Mesopotamia

See this issue of Saudi Aramco World, where Nature's Best-dressed  nudibranchs (rhymes with foodietanks – and meaning sea slugs) bring out the exclamation marks from Nathalie Yonow, in her knowing descriptions (see her book) matched by gorgeous photos by Gordon T. Smith; and where Robert Lebling tells not just about the"first ghoulish proto-vampires", but more, including about the mental disorder of thinking one is, say a wolf — in Monsters from Mesopotamia, a rivetting true story haunted by June Brigman's illustrations.

"Nudibranchs don't just decorate the coral reef, however; they eat nearly every marine creature except fishes."
– Nathalie Yonow
Posted by anna tambour at 6:44 pm No comments: 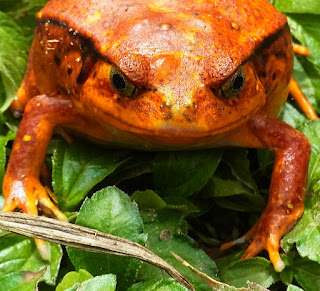 Posted by anna tambour at 1:17 pm No comments:

Now it's the 9th of August, and these lines from today's Philadelphia Enquirer editorial get partly to the problem, but don't really reach it:

"Intolerance in this country has been exacerbated by the economic uncertainty that touches us all so soon after the recession. America will get over the fiscal crisis, just as it recovered from the Great Depression. The more difficult job is to overcome the hatred that can't be obliterated in a political environment that stresses antagonism above cooperation."
– Sikh temple attack a product of intolerance

Tragicomic mistake of generic ID and denial of people as persons. "I'm an individual but he's an it."

It is highly likely that the attack was also the result of boneheaded but all-too-common ignorance. With all the opportunities we have now to learn about others, a frightening many people flaunt their lack of interest in learning what they don't already think they know. They spend their time hating for its own sake, spend their social skills my preciousing their hate, and most dangerous of all, ascribe intentions to others that exist only in the addled minds of these hate-polishers.

I don't agree with others, however, who want hate sites to be shut down. Better to know that they exist, and what they say. And I would hope, put them on Watch Lists that actually do something socially beneficial.

And so we get to the post below that I put on this site some days ago, about a hate site that is attacking me and others--falsely ascribing and raving in the typical incoherent but violent language that hate sites do. The guy behind it is typically unrevealing about himself, but a fervent networker. Is he dangerous? That depends, doesn't it? Even the man who assassinated Prime Minister Yitzhak Rabin is a "hero" to some. Just how many is an unknown but frightening prospect.

There's a vilification campaign being waged here, here, and in the writer's networking, against me (and many others who have dared to speak out); and though on one hand, I don't think I should honour this insanity by answering, on the other hand, the context should be known. The paragraph taken and twisted to be used against me comes from this thread (of 2005), where I posted extensively, and invite you to read my postings as well as the others.  The particular post that the paragraph comes from, I've also pasted below for your perusal (apologies for the sloppy typing mistakes I've made in the thread [like counties instead of countries] all made in the flurry of thinking but not proofing).

But before you read that, you might be interested to see other relevant, and more recent postings on my blog.

Holocaust teaching beyond the "The"
In the name of . . .
Is one passport too much to ask for?

My first novel, Spotted Lily, is also about the shifting morality of religion. As a Jew, I feel that is is not only important to criticise that which is I see as morally wrong, but my duty.

Anyway, onwards to the piece that the quote came from:


Posted on Sunday, July 10, 2005 - 06:23 pm:
Al [Duncan], I agree with everything you say here, and in particular, your concern with religious fanaticism. Yes, it and its outcomes have been with us throughout history. In my own family, I remember clearly a conversation in which the family tree was taken apart in terms of which relative died in which camp. But then that is only some of them. Others escaped pogroms earlier, and yet one escaped a fate as a rabbi in a revered line. He was fiercely non-tribal, viewing people for how they live as part of the family of man, which means everyone. But the 'family of man' idea is out of vogue now, I am very sorry to say.
(see http://en.wikipedia.org/wiki/Brisk_yeshivas)

Postscript, 9th of August:
I originally pasted the whole 2005 thing here, but it's been here long enough. The rest is here on the Nightshade site.  I'm not disclaiming any of it, and am happy for it all to appear in bold here, if there were a reason, but there isn't any more.

There have been developments that are interesting and pertinent, concerning one of the crooks I mentioned in the paragraph that caused such foaming at the mouth. See "Career since release" in Wikipedia's Rodney Adler entry. The truth might offend, but then it often does. 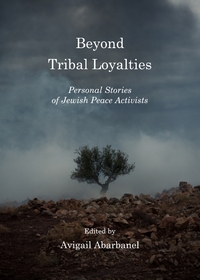