NOTE, 27 February 2007: This might be an interesting post for people interested in beetles, but due to my slackness, it does not match the pictures, as the little beast here is a bug, and quite an interesting one at that. Please read this later posting. I should be sucked dry by an interesting spider. 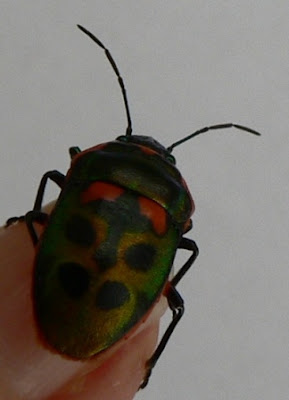 This little discombobulator interrupted me the other day. If it hadn't flown into my carefully posed leaf cutting, I would not have known it existed.

Only three weeks ago, there was a loud hum of bees in the Angophora floribunda ('rough-barked apple') and the songs and chirps of many birds, from the brush-tongued rainbow lorikeet parrots to long-beaked wattlebirds. The tree looked baubled, but little did I see that it was jewelled.

The jewel beetle's visit was short. It flew away after only a few moments. The tree was silent, the flowers shrivelled changelings of their former selves, so I visited the tree's sheddings underneath its branches, and found 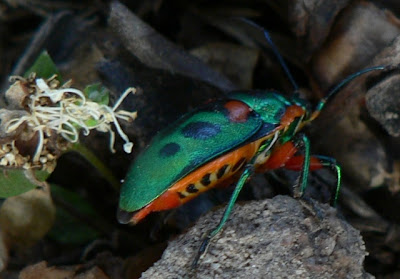 And the next day, I visited again "Estimates of the number of species of Coleoptera (beetles) so far described in the world vary between 277,000 and 350,000. It is a notable fact that, whereas 70 percent of the known species of animals are insects, no less than 40 percent of the species of insects and about one-third of all animals species are beetles. The number of species of Coleoptera known to occur in Australia is greater than 19,000. This total will, however, be considerably exceeded when the fauna is thoroughly studied."
- E.B. Britton, "Coleoptera", The Insects of Australia: A Textbook for Students and Research Workers, Division of Entomology, Commonwealth Scientific and Research Organisation, Australia, Melbourne University Press, 1970

So, getting to that obsessional what? First, the easy part. They are members of the family Buprestidae, otherwise known as jewel beetles. ("world species 12,000: Australian species 850" - Trevor Hawkeswood).

I think these are from the principle genus Stigmodera, and I'll punt further to say that - oh, no I won't, even though s. variabilis is tempting. What I will say is that Trevor Hawkeswood wrote, in his Beetles of Australia (Angus & Robertson, Sydney, 1987) :

I'm sorry I missed their high time in the flowers high above the ground, but none of the characters I met earthwards, walked a straight line. 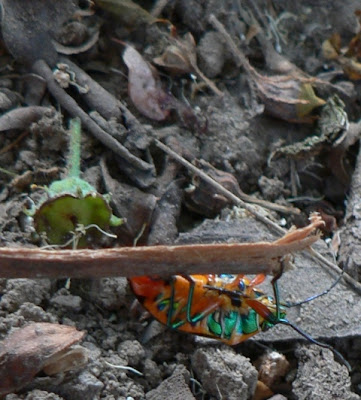 Not a bad way to live a three-week life as an adult.

Not a bad way for a human to be discombobulated, either, instead of sitting in front of a screen screaming at 'bugs' in the quite inaccurately named "new and enhanced" Blogger.

Colorful drunken beetles... how can you beat that? :-) I especially like the contrasting green and orange. Is that to warn predators that these little critters are toxic?

Here in AZ, it's American robins getting drunk on fermented berries (though the flock in my neighborhood hasn't shown much sign of intoxication -- just ubiquity).

In that photo with the ants [thanks for the advance peek!], are they coexisting or are the small critters feasting on a dead bigger one?

Alice, they are not toxic. On the contrary, they are treasured by certain wasps who sting them paralysed and carry them away to their underground lairs where, in the fulness of time, they will be eaten alive (though not kicking) by wasp grubs.

Faren, I've never seen drunk robins. Do they wobble, or fly skewiff? - but I have stood underneath a giant maroola tree in Africa, gorging myself on its delicious fruit, and wondered at stories of drunken elephants. See Science Daily:
http://www.sciencedaily.com/releases/2005/12/051205235555.htm

The ants are excavating the beetle, which is now a shell of its former self.

ps. I don't know if THESE particular beetles have to contend with wasps, but others do. Some taste better than others, but I don't know if any are toxic to the wasps who are attracted to buprestids. There are so many species of both, so many matches and mismatches.