Prostanthera lasianthos, the dog-Latin name for the Victorian Christmas Bush 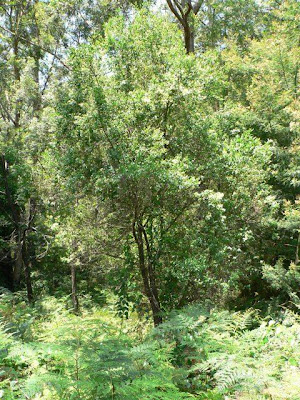 This is usually a bush, but in this case a nondescript tree, easily overlooked. The Prostanthera lasianthos is the largest of the 'native mint' bushes in Australia. Crush the leaves and you'll smell at first, a savory, not quite foody bouquet of pennyroyal, oregano, and thyme. The scent is unusual in that it increases in complexity after a few minutes, finishing with a lovely depth of sage.

The flowers are the size of a human baby's finger joint. 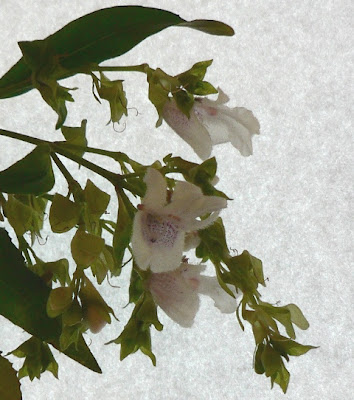 'The next morning I was woken more pleasantly. A young round-faced Indonesian man was peering down at me. "Sabran" he said, pointing to his chest . . . Talking to him was not easy for I still had not acquired much conversational Indonesian, but he and I soon evolved a pidgin of our own which served our particular requirements. One morning as we were steaming slowly up river, he called me and pointed excitedly to a tree on the bank.
"Burung ada,'" he said. That I understood. There had been a bird there.
"Apa?" I said, meaning — what kind of bird?
His answer to that, however, defeated me. He repeated me. he repeated it several times but I was baffled.
Then he said "Irena puella puella." And that I understood immediately. It had been a fairy bluebird. Sabran knew the scientific name from his time as a zoo collector and I from my study of the field guide to the birds of South-east Asia. I was delighted by the thought that he, who had never left his native Borneo, and I, a stranger from England, should have been able to make ourselves mutually understood by speaking the dog-Latin that European scholars had used during the eighteenth century.'
— David Attenborough, Life on Air: Memoirs of a Broadcaster, BBC Books, 2002, London

This latest batch of pictures is great, and the plant sounds amazing. The flowers remind me of a nature show on the tropics I saw last night, where (in Borneo, I think) there's a mantis that looks like an intricate white orchid flower, enticing the insects it later gobbles.

As for your "What do you call..." photo, are those beetles of some kind? Shown that way, they could almost be a glorious, 3-D, living tattoo.

That mantis is wonderful, relatively speaking. I'm so glad it's its size, and we're who we are. I would be attracted, if I could only fit into that orchid. Here's the Wikipedia entry for it.
http://en.wikipedia.org/wiki/Malaysian_orchid_mantis

As for the beetles, they are more of the same species of jewel beetle that I wrote about earlier. As tattoos, wheew! These pictures don't show how the richness, and how they change colour with the play of light.