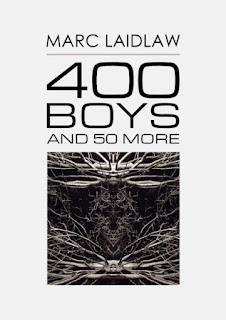 But who cares about history? The question is: Do the stories work now? And how! The thing I like best about Laidlaw won’t fit into one 'is'. 1) He’s a wet dishcloth to his stories. They rule. So whatever voice the story is, it most assuredly is. If that philosophy was good enough for Hans Andersen, I reckon it’s good enough for any writer. Certainly this reader loves it in a collection, as it makes each story a new find. 2) Whether the tone is baroque or contemporary, the tale *moves*. Though the stories aren’t shallow by any means, they are stories that professional storytellers could have waxed fat on.  3) Laidlaw's horror hasn't a whiff of falseness. It's real and deep and sophisticated and thoughtful as philosophers in hell. One example is his brilliant "The Boy Who Followed Lovecraft", which should be in many anthologies. 4) When Laidlaw's stories are funny, the humour is gloriously under the top. He does deadpan so well ("Mars Will Have Blood", "Pokky Man"!), I can hear the ghost of Jack Benny applauding. But don’t worry, anyone born ten minutes ago. Laidlaw should appeal to old, young, and immature enough to enjoy anything marked 'for adults'. And oh. did I mention that many of the stories' titles are treats in themselves? Get the book and see what I mean. And if you think as I do, then cry out as I have been for a while, for an omnibus collection of his Gorlen and Spar stories, my favourite contemporary high-fantasy characters and tales. They’d make a terrific movie series, too.
Posted by anna tambour at 5:13 pm No comments: