Adventures with your tongue in the bush

Flowers flowers everywhere, to drink from and to eat.

Will you have hollandaise with that? 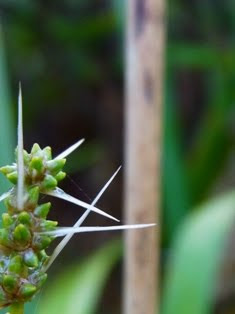 This Lomandra longifolia has a quiet sense of humour. Both its flowers and the base of its strappy leaves are said to be good tasting. They should be. It is a member of the family Asparagaceae. 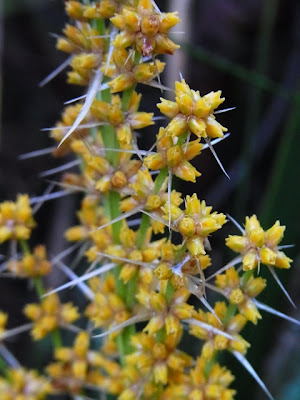 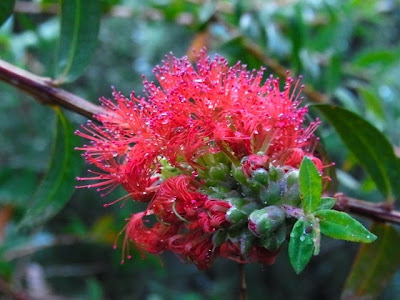 Listed as "Red-flowered paperbark" and "commonly known as Hillock Bush", say many quoted sources. Balderdash! Almost every Australian who sees these calls them bottlebrushes, though bottlebrushes belong, maybe, to another genus sent to try us. Botanists are studying them to decide how to best argue classification. In the meantime, Red Bottlebrush describes quite a few native plants that are currently foudroyant. 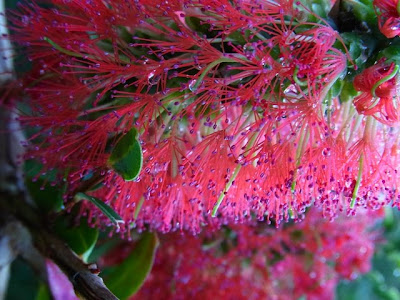 Utterly delicious — the rain-nectar cocktail, sucked straight from the flowers.
Posted by anna tambour at 4:15 pm No comments:

Great minds, some might say. Minds, shminds. It's a case of observation.

When Kathleen Jennings and I both wrote about those feral migrants—leprechauns in the paddock—neither knew the other had been spying on them too. We didn't look from the same point of view (or maybe the sun was in her eyes) for as she writes:


"Our two stories touch on almost exactly the same theme in similar settings from opposite standpoints – in some cases, down to sentences which directly contradict the other story."

Nobody's perfect
Get your eyes to "Undine Love", a story not only written by her, but illustrated by her too. As I've said before, her art is a joy even if she's overendowed with talent. She paints with words as fluently as she tells stories with her paintings. So, so what if she contradicts the only correct standpoint? So does every mapmaker brainwashed by the blood-in-the-headedness of those upside-down Northern Hemisphereans.

"Undine Love" appears in Andromeda Spaceways Inflight Magazine (ASIM) issue #52, just "released from captivity". I've only mentioned one story but the whole issue is a mesmeriser.

Trap yours here (available in many formats, including instant-gratification)

Posted by anna tambour at 5:00 pm No comments: Not only delicious picked straight from the beach, but in my opinion, a great model. If I were a science-fiction magazine designer, this would be a cover shot.
Posted by anna tambour at 5:28 pm No comments: 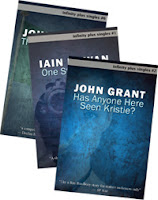 "This month, infinity plus launches the singles series, cheap short stories you can read in a single sitting at lunch or in the evening, an opportunity for readers to discover unfamiliar authors, and maybe a chance to breathe life back into the short fiction market."
– "Infinity Plus Singles: a new line of standalone short story ebooks"

Full details and purchasing links at infinity plus singles

And my not-so-secret favourite,
Blaft Publications, is at it, too, with "an e chapbook, a very short ebook"
Eating Sugar, Telling Lies by Kuzhali Manickavel, a writer of great power, wickedly accurate satire, and no patience with long-windedness.


Confessions of a dead-tree addict, an addict to smell, touch, and the beauty of text on a page
I do admit that I thought "Who will want to buy a single story to read as an ebook?" But then I also thought, "Who would want to read a novel as an ebook?" Possibly I would have thought once, "Why would anyone want to convert a picture to thousands of symbols that people have to learn to decode to understand?"

I hate reading fiction I can't drop crumbs into, rip a hangnail in tension over, and bleed onto.
I hate the current level of aesthetics in typography.
But they are cheap.
And they're gloriously self-indulgently instantly accessible.
Horrors, but hooray.

As for me, I still don't have an e-reader. They don't work here in the bush. But even if they did, these now are primitive. I'm hanging out for the e-book with illuminated dingbats.
Posted by anna tambour at 6:21 pm No comments: 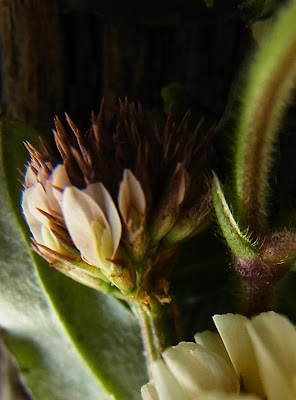