Against the skin: Hidden colouration 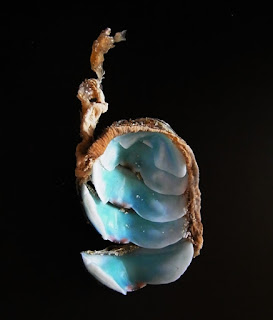 This chiton, typical of these rather dowdy creepers, is camouflaged on the outside to look part of the shadowed black and brown rocks it feeds upon. So why does the inside of its exoskeleton (as well as many others who wear their bones as coats ) look as if it's dressed for a mating dance?
Posted by anna tambour at 5:19 pm No comments:

Bloody hell! The BBC should know better than to headline "Australia: Coup capital of the democratic world". Calling it a coup is only showing ignorance of the flexibility of the parliamentary system. Americans and the world were stuck with George Bush until the term was over, but this change in Australia is hardly a violent and sudden takeover but a "finally" moment in answer to the secular prayers of such a majority that the Tonygov would be clobbered come Saturday.

So, Nick Bryant, though your description of the "bloodletting" is colourful, don't confuse your trade and its increasing propensity for covering politics/government as if they're gladiatorial contests that have rounds that can extend years before the final coup, with serious journalism and coverage of current affairs. By making all politics into drama about personalities and challengers, you have helped to reduce the complexity of democracy to gameshow, and to eliminate serious discussion let alone information about important issues.

In the case of this "spill", politicians' wishes to save their skins were for once, in harmony with the electorates' lazy but increasingly stroppy thoughts of—"Who will rid me of this troublesome priest?"

Posted by anna tambour at 3:28 pm No comments: