What would you call a gathering of Buprestids? *(especially if they weren't) 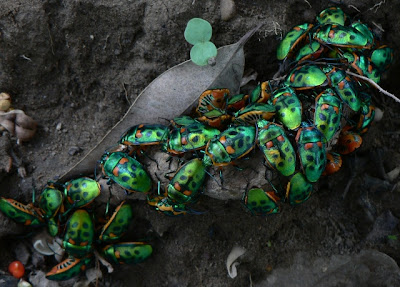 * (27 Feb 2007) Thanks first to George Hangay and Pavel German's excellent Insects of Australia that I found in the local library yesterday, I can now tell you that I have been terribly wrong in my identification of the beautiful insects on this posting. I thought they were those much prized insects, the Buprestids, otherwise known as jewel beetles. They are, in fact, jewel bugs — also called metallic shield bugs, and this species pictured here is always properly called Scutiphora pedicellata — a very big difference to a beetle of any stripe. As the Chew family's excellent and most humble (they call themselves "the non-professionals") Brisbane Insects and Spiders (with topnotch photos) says about the Scutiphora pedicellata:

This bug is in the Shield-backed bug family. Shield-backed bugs are plant suckers. They can be distinguished from other shield bugs by their scutellum completely covered the whole abdomen and wings. This is why sometimes they are miss-recognized as beetle. They are easily distinguished from beetles by having sucking mouthparts and the shield on the back is continuous, not the divided wings cover with separation at the middle.

Well, rot my boots, of course! Anyone can see the sucking mouthparts here (anyone who looks!), and the fact that the shield on the back is not divided wings, meeting in the middle.

So, now to the other difference between beetles and bugs. Bugs are usually reviled. Insects of Australia says this about the S. pedicellata: Contrary to its common name, it is a scutellerid, or jewel bug. Often it can be seen in groups as they converge on the fresh shoots of shrubs. They suck the sap, causing the shoots to wither.

Oh, my. They eat plants! And here, I thought I had been privileged to see a nectar eater, especially since its behaviour seemed perfectly innocent, and the buprestid I thought this was, is a nectar eater.

True bugs have an unfortunate reputation no matter how beautiful they are, because of bugs like another spectacular metallic jewel bug, Tectoris diophthalmus, otherwise known as the cotton harlequin bug.

Beetles can be plant eaters, too, even some of our beloved Australian Christmas beetles. Here's what Hangay and German have a pretty picture of a roudy crowd feasting on eucalypt leaves. They say about Boisduval's Christmas beetle (Anaoplognathus boisduvalii) —

This large Christmas beetle can be found on Eucalyptus teretricornis and E. platyphylla. It favours the young shoots of these trees and sometimes occurs in large numbers, causing significant damage to forests.

A letter in the Sydney Morning Herald earlier this summer commented on the fact that there are no butterflies to be seen in Sydney any more. Why should there be? They are only the next stage in the life of a leaf-eating caterpillar.

There are plenty of butterflies out here three hours south of Sydney — but here, there are hardly any people.

This diversion doesn't excuse my miss. But I feel more embarrassed to be somewhat disappointed that they are bugs and not beetles than I am at displaying my ignorance in public.