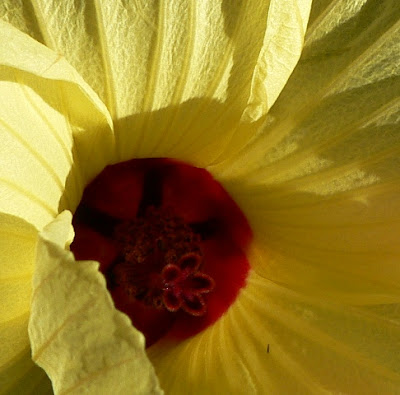 "The next level" at Mythic Delirium

Readings are usually the best inoculation against enjoyment of the written word, but not only does Mythic Delirium not inoculate.

This multi-media magazine makes poetry something that is well worth catching.
Posted by anna tambour at 12:46 pm No comments:

Recommended reading: Life Is So Good 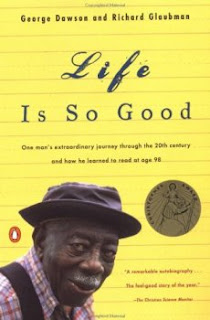 I highly recommend reading Life is So Good by George Dawson and Richard Glaubman.

That's George Dawson on the cover. Read a bit about him, this book, and literacy on the Literacy Connections site.
Posted by anna tambour at 6:52 pm 3 comments:

Australia is home to the many of the world's most surreal plants. Here are some examples that are in flower now on the south coast of New South Wales. 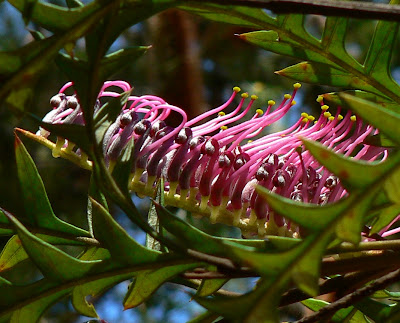 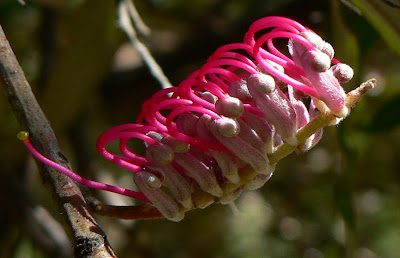 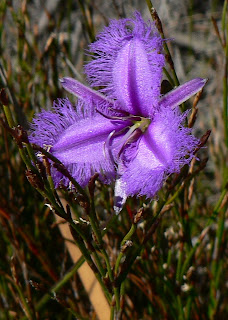 Fringed Lily (Thysanotus tuberosus)
A favourite of mine, this minute flower is widely distributed, yet as Warren and Gloria Sheather say in their superb site, A View from Yallaroo, " The plants are invisible . . . until they flower. " Even then, they are invisible to those who travel faster than a walk. The flowers are so tiny, they'd be useless as a corsage – and anyway, they die as soon as they're picked, so in season, they can always be found in their most beautiful settings.
Posted by anna tambour at 4:23 pm No comments: 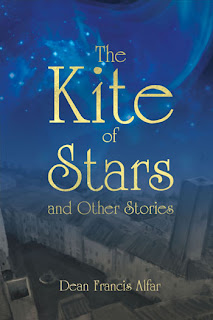 Cappadocia, Warrambungles, and Monument Valley are spectacular, but to those who aren't size-prejudiced, spectacular sites are everywhere. 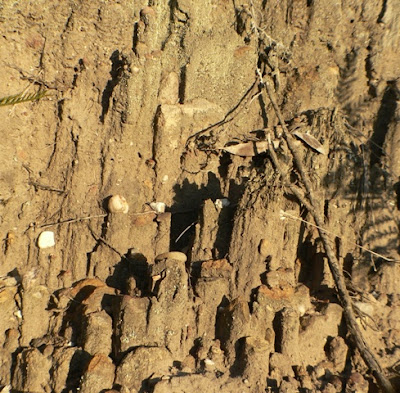 Posted by anna tambour at 6:19 pm No comments:

Peter Magellan, in a recent letter in New Scientist and on his excellent blog, Effing the Ineffable, advocates a symbolic magnifying glass to fill a need – We (atheists, freethinkers, rationalists and assorted brights) need a symbol under which we can unite, much like the Christian fish.

He calls this "an unambiguous alternative to symbolise all kinds of rationalist world views, not just atheism - which defines us by what we are not, rather than by what we are."

Myers says: Now, though, there is one possible option: the RDF has started the Out Campaign, an effort to get atheists to publicly and proudly declare their status. It has a slightly different meaning — it's not exactly a symbol of atheism, but more a symbol of the willingness to come out about your disbelief — but it's nice, it's simple, it's clean. It's a simple red Zapfino "A", the scarlet letter.

I am wholeheartedly for the magnifying glass, for a number of reasons.

Defining what we are is always preferable, I think, to what we are not. Advocacy stimulates and inspires, whereas defining from the negative adds legitimacy to the other side.

The question of whether God exists, any god, is irrelevant. The pathology should be the only issue, and in that, no person who believes in any god can refute the simple evidence stuck in the pudding of care. God is either supremely indifferent to what happens on earth, and to every living being, or sick enough that the greatest meanies who ever lived, including the greatest terrorists – are milktoasts in comparison.

If God exists, the very randomness of who and how the living suffer and do well should negate a reason to either give thanks or to say please. But that doesn't mean that it's worthwhile arguing with people who still think that their god will treat them differently.

The more effort one spends on refuting what can never be proven to exist, the less one can explore the wonders of what does.

Which brings me to the other reason I am so keen on the magnifying glass as a symbol. While I don't usually enter competitions, I entered the following earlier this year in the New Scientist/Australian Museum Eureka Science Photography competition just for the chance to express my feelings. (Though the winner of this and previous years' competitions, and other runners-up are far out of my league, so many of these gorgeous and inspiring pictures concentrate on the small.) 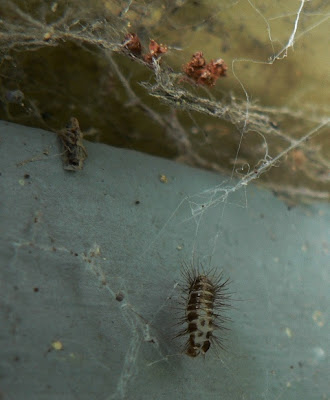 Outer Space isn't the last frontier. This picture was taken five steps away from my office, on the other side of the wall. It is both unique and usual in its shed skin, mummified life, eggs, silk, plant life and randomly beautiful 'design'. There are countless inter-related frontier galaxies that exist right here on earth, from the seas to the barely visible with the naked eye, to the Biosphere Mary E. White writes about in Earth Alive! From Microbes to a Living Planet. As for problems, no big picture can be understood without the small. Concerned about global warming? "Insects are the first things to go," CSIRO scientist Don Sands says. "They're the best indication of climate change that we have because the impact on them is almost immediate."

But who notices insects, except to squish them? Mostly people who were bitten with curiosity as kids, like the Chew family of Brisbane. Now more than at any other time, people are screened off from the natural world. Computers can't spark the insatiable curiosity that is the basis for a lifetime in science (and problem solving) anywhere near as well as a $7 magnifying glass and a shove outdoors.

* I love the fact that the shed skin in the foreground is from the larval stage of a (terrifying to curators) creature that even when full size, is noticeable more from the evidence it leaves behind than the sight of it. Like Ebola, it is part of the Great Unseen to the uninterested, but indisputably and importantly, real.
Posted by anna tambour at 8:40 am 2 comments:

as the grains of sand

Tapping the sand out of this sea urchin's shell, these less weighty though not much larger 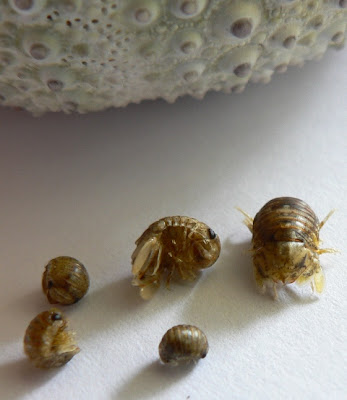 copepods fell out.
Posted by anna tambour at 8:54 am 2 comments: