The flu and solidarity

Today Indonesia is being chided for wanting to make a buck out of bird flu in the spirit of the market economy and in solidarity with Chinese sensibility, which combines capitalism and nationalism to a New World Order advanced degree.

"Flu solidarity needed", whines The Financial Times (London). Its editorial advocates "richer nations to help poorer ones purchase vaccines, while investing more in seasonal vaccines and pandemic vaccine research at home to stimulate ways to make more sophisticated, rapidly-produced and cheaper vaccines for all." The problem with this approach is that it doesn't recognise the complications of mutations (picture a man running after a horse, bridle in hand. Well, he did grab the bridle, didn't he?) and resistance. And, possibly because industrial farming is such big business, the FT doesn't mention the disease problems inherent in industrial-scale farming, nor the impossibility of being ahead of the ball when it comes to diseases that jump the species barrier.

"the question I am asked daily: 'Why are you so worried about 151 deaths from H5N1?' Well, go back to 1916, to Etaples in northern France, where a form of flu causing heliotrope cyanosis (a characteristic lavender coloration of the face) with a case fatality of 60% was beginning to spread. There were 145 cases. At some point in the next two years it mutated to become more infectious and 30 times more virulent. Then it killed 50 million people. Doesn't this ring a nasty bell?"
- John Oxford (who is at the Centre for Infectious Diseases, Retroscreen Virology, Queen Mary, University of London) , in "The Next Pandemic" (Nature, 28 December 2006) his review of Bird Flu: A Virus of Our Own Hatching by Michael Gregor.

Read an interview of John Oxford 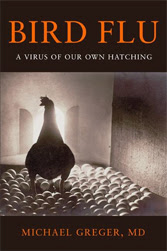 Bird Flu: A Virus of Our Own Hatching

Read the book. See the video.