Portrait of the choko as an artist's model

Sorry to be late replying to your questions re the picture in the previous post. I was returning from a psychological assessment mission to the former planet Pluto when my train was derailed by debris that also briefed the captain to the height of a quantum leap. Needless to say, he could no longer reach the controls. I had to take over, getting the train on track under my own fair steam, then driving and piloting (the pilot having been jettisoned as trash in an earlier tiff with the ticket-taker over bags of train-goers' goods), a task for which I never trained, so by the time I got home it was almost 2300 hours yesterday, New South Wales, Australia time, and I haven't finished writing up my assessment as I am still feeling under the weather from motion sickness, not having had a semicolon's break, and the former planet Pluto's eccentric orbit having become much more eccentric since its recent redesignation.

Which, I know, is much ado about nothing. So onwards to the important stuff.

Yes, a trio of pears they are. And as for what you, Faren, unkindly call "that grotesque thing amongst them", you are in good company in your ever so cruel judgement. Allen Gilbert, writing in The Age, in an article titled The Ugly Truth, continued with:

"The choko is no oil painting"

a statement which shows why Gilbert doesn't write about art. The choko is, especially in its outrageously fecund, craggy, twiningly mature state, the Rembrandt self-portrait of vegetables. I imagine that Gilbert would think a pear an oil painting, but pitch the greatest of Ingres' paintings against a mere jot of self-regarding glance by the old wrinkly Himself, and whole countries could feed their populace for millennia on the difference (or buy their leader dinner at a five-star in someplace civilised).

Ingres would certainly have been revolted by the knowing leer of the afore-portrayed "grotesque" choko, and I'm sure that Ingres would, if persuaded at pistol-point to consider that an artist's model, would stretch it to zucchini length and shoot it so full of botox, it would gain the smooth glow of a supermarket tomato / Nicole Kidman. But as Nicolas Pioch, who runs WebMuseum, states about Ingres: "He was a bourgeois with the limitations of a bourgeois mentality."

Chokos are above the madding bourgeoisie, which you can prove to yourself by looking at their popularity amongst the rabble. As Robin Cartledge (aka Grandpa Pencil ) says: "So long is the line of people trying to give them away that, when the choko is in season, it is wise to have a few different recipes up your sleeve." He proceeds to do this with some new wrinkles on old favourites. Try his choko dessert and choko chips, and you might think, as I do, that this vegetable with character is something to plant for the generations.

Oh no, it's choko pickle is the title of an article by Sally Wise on the ABC (radio) Tasmania's site. "... a lady rang afterwards," she writes, " and gave me a tried and true recipe for Choko Pickle, so here it is. It sounds pretty good. Apparently you can make a jam out of them as well." Apparently she didn't.

Wikipedia has a respectful entry for Choko (Sechium edule), listed as 'chayote'. Also called chouchou, mirliton, fuk maew . . . , this character has more names than a con artist. Gaze at young and relatively lovelies on this page and read all about them, in a -pediac way.

In Australia, they're the great Unwanted, but look what a bit of respect and a different frame of mind can bring about. The chokos on Mahanandi's splendid site do, however, look suspiciously smooth. Stretched, they would be quite bourgeoisily oil-paintingsish — lounging, say, dewily in a Turkish bath.

Although she is common in her visual taste, and didn't keep them till they matured to a state of the confrontationally fruitful, she did something that I would recommend to everyone with true taste and heartlessness (or is it an instinct for self-preservation? At the way they grow, it can be a them-or-me situation). She ended their lives before they became worth an Old Master's glance, and she cooked them and probably ate them all up, as I wanted to after reading her scrumptious-looking recipes.

As I'm surrounded now by a huge lot of chokos that I brought home from the former planet Pluto (everywhere I went, former-planet-Plutonians pressed bagfuls upon me), I'll be publishing some recipes in the next while, as soon as I can kill them.

In the meantime, here's another face of the afore-portrayed, before it was heartlessly dispatched to be consumed raw with lashings of lime juice and chili. 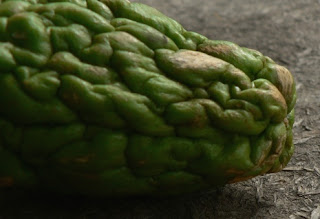 When I called the choko "grotesque," that wasn't really a slur. I *like* grotesque -- far better something that would have pleased Archimboldo than the insipidness that tedious Ingres would prefer. I love the thing's
shape, reminiscent of some gnarled peppers, but also the brain's convolutions and the knotted muscles of a bodybuilder (all wonderful grotesques, even though I don't like bodybuilders per se).