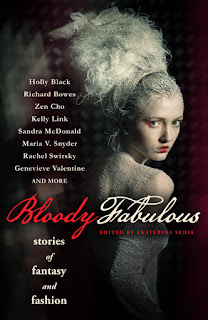 Bloody Fabulous: stories of fantasy and fashion
edited and with an introduction by Ekaterina Sedia
published by Prime Books

Stories:
“Coat of Stars” by Holly Black
“Savage Design” by Richard Bowes
“Bespoke” by Genevieve Valentine
“Dress Code” by Sandra McDonald
“The Anadem” by Sharon Mock
“The First Witch of Damansara” by Zen Cho
“The Faery Handbag” by Kelly Link
“The Truth or Something Beautiful” by Shirin Dubbin
“Waifs” by Die Booth
“Where Shadows Meet Light” by Rachel Swirsky
“Capturing Images” by Maria V Snyder
“How Galligaskins Sloughed the Scourge” by Anna Tambour
“Avant-n00b” by Nick Mamatas
“Incomplete Proofs” by John Chu

Buy from:
Amazon
Barnes and Noble
Prime Books
Posted by anna tambour at 10:05 am No comments:

A thought:
If our eyes, like this stingaree's, were on our back, then hotel fruit bowls would be filled with, not Granny Smiths, but medlars. 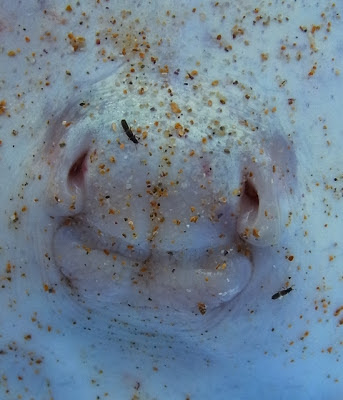 
Another view of this innocent slowgrowing common bycatch, that, if thrown back while pregnant, usually aborts. When rays or skates are presented at a restaurant, it's surprising they aren't called 'milk-fed'. Zola mentioned them as common fare for city canteens in L'Assommoir. But recently, when I was stuck at a lodge with pretentions, the dinner choice was Zebu, Skate with Caper Sauce, or nothing. I chose the Skate but the kitchen had no clue how to treat it, so the thing smelled like a nappy bin, and went back only lightly tickled by my tines.
The next night at the lodge, the menu said "Fish fillets", which hooked quite a few innocents. It's rude to talk to things on people's plates, but I had met my table neighbour's dinner the night before, and could have said to it in sympathy, "You've had a dressing-down."
See Andrew Grygus' Skate Wings and Hank Shaw's Loving the Unloved.
And a must: Rhymes for histotrophy — a Quest.
Posted by anna tambour at 6:43 pm No comments:

"the oracle in my fahrenheit itches" — Portraits of Ruin. Just get it, despite the lying title.

For anyone wishing to self-gratify with a book that will make you want, finally, to efficiently slit your wrists, sheathe your blade if you think that PORTRAITS OF RUIN will be your (last) boon companion. It'll on the other hand, jilt you faster than you can say "Fie" or alternatively, as a passage in one of the stories does:


Marquis de Sade: [His new wife, Penny Porsche-de Sade, who’s flashing his new book, On the Paradisal Heights of The Orgasm Circus: Existentialism Is for Uptight Victorians and Dummies to cameramen, on his arm. Waves.] Hi!Hello. [Beaming.] Hi. [Throwing kisses to the fans in the bleachers.] Bonjour! Love every one of you! 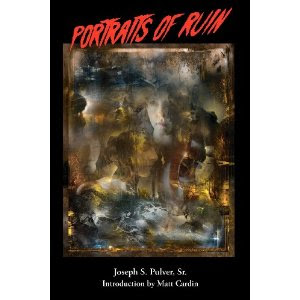 PORTRAITS OF RUIN by Joseph S. Pulver, Sr.
with an introduction of rare quality, by Matt Cardin
Published by Hippocampus Press

Don't judge a book by its cover
This rather typically Horror-screaming cover covers many sins: damn fun, romantic lust, delirious joy; intense observation, oddly enough, of others ("Gull-voice oboe cries", "Gill standing [wearing a black wig / under the wig her real hair is wet--the wig sticks unevenly--some of it is flat and sticks out like crow feathers", "At this distance it could be an angel or the eyes of a pumpkin." "the accomplishments of a dead animal", "A shadow walks the street like a bass player with somewhere to go."); playfulness; heart-rending beauty as indissectible as a rainbow; magic; music in timbres unique to this writer, as if he'd mixed his own alloy and poured it, red-hot, to cast his own bell.

There are many styles here, too. Sure, there's the whole panoply of human pain and paingivers, but that's only part of the whole.

Pulver is famous for his unique let-it-all-flow-out style, but there are many here. Also, the easy flow is, I suspect, as easy as an iceskater's smoothness.

In this book the spaces matter. Fonts matter. So does all the punctuation. So does every word, no matter how shed like skin cells from aetheria and swept up it might seem. It's clear that Pulver is not only a perfectionist, but an agonist (isn't it an undramatised tragedy that this word, a noun even, isn't represented in dictionaries by meaning #3: 'one who agonises'— the snobs). (But as I was leading up to: five stars for the production team at Hippocampus Press, for this is a most excellently set book, with a variety of treatments, each executed with much care.)

The skill of writing is consummate and invisible, never dazzling us with lectures on technique. Nor is there any of that painfully padded & crafted abuse of words and our patience that is so common with MFA-waving 'experimental' authors. (I highly recommend Matt Cardin's unusually useful and most interesting introduction. It talks of many things, including trying experimentalism; and would be an excellent essay for anyone who must read anything about what is written.)

Above all, this collection reminds me of Rimsky-Korsakov's "Scheherazade"; and if I had covered it, I would have woken Bakst, who would, I know, have done it for a copy he could take back with him; for Portraits of Ruin tells innumerable stories, not vaguely in the least—with no bullshit, but richly and not specifically (and he doesn't leave those hated 'ly words' and adjectives' to die from no exposure).

Furthermore, the celebrated Pulver flow cannot disguise his genuine romanticism, not one wedded to doom but surprisingly mushy. This collection could easily be sold with a chocolate box cover, and satisfy consumers. Oddly, this little secret is something no one ever mentions.


She removes her flower-print cotton dress—one land of tinted-weather melted to a hungry landscape of astronomy (every star for me to see). Offers this vampire ingot-nipples, oh the torchlight-joy contact. I FEEL TOTAL. Offers me that magnificent heart—Burn-burn-burn—Burn-burn! My own Alice, crackling, laughing, Drink me. Drink me. Come that I might annotate you with kisses and commas and prickled clouds. Come with your need. My cupcakes breasts will paint you with strawberry whispers.

I have told you this to pay him back for another unsocial characteristic of his. Many times in the past months in which I have had the privilege of fluffing his moustache with correspondence, I have quoted back a sentence or phrase that he's minted, because I've liked it so. He never remembers a one. I truly think he doesn't even wear his books in his coat.

The only other criticism I can think of is one about humility. Pulver has too much of it. Stop hoarding it, man. The rest of the world needs more.
Posted by anna tambour at 3:33 pm 1 comment:

Feeding in the rain 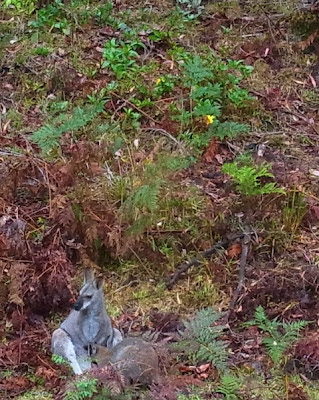 A queen wouldn't sit as well
There has been so little rain for so long that this wallaby mum and toddler got their portrait taken, in celebration. She has such patience and the drinker is so in her cup, that it's a shame this isn't a daguerreotype.
Posted by anna tambour at 1:26 pm No comments: 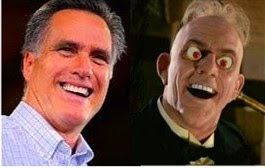 "Oh, Mr. Brooks... Surely you are joking....He had all the cheerfulness of someone who knows a lie goes around the world while the truth is putting on its pants."
— comment
Posted by anna tambour at 5:07 pm No comments: