"If I am to be kept in the dark, I have no idea what can be said and what can't. You cannot withhold information from me, simply giving me hints that a crisis is about to occur, then expect me to say the right things."

No, this isn’t Rex Tillerson or anyone in what’s left of the US State Department. It’s James Ovit, truth-telling in the self-deprecatedly titled The Sometimes Spurious Travels Through Time and Space of James Ovit--dubbed by the publisher all too skeptically “a science fiction novel in three parts”. 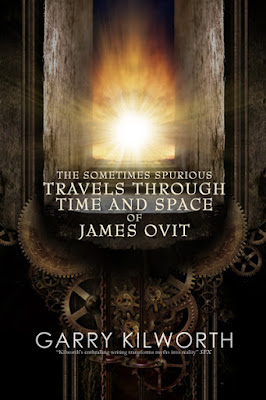 This so-called novel is really a journal by one who, wherever he goes, whenever, seems to prove that the more things change...

"I was sleeping with an extra-terrestrial, a creature from outer space, one of those beings that were inscrutable to Homo Sapiens and had to be watched in case they had malevolent designs on my home planet, a world which was by definition better than any other."

though, like the Brexiteers pointed out to their dishonest benefit, experts don’t necessarily know all.

"One does not have to travel naked through time."

Actually, I copied so many parts of this journal that I found wry truth in, that I should stop here, because you should be the one to get the same thrill that I have. As with all the best kind of fiction (to my taste) the thrill is based on the state of the real world, producing that complexity of reactions--wry, tragic, infuriating, funny, horrific, teetering, touching--all that, and this novel which reeks of integrity and knowledge, manages to be a page turner of the first order.

Although almost no one has heard of The Sometimes Spurious Travels Through Time and Space of James Ovit, it should be as known as the fiercely funny Glenfiddich Award-winning Something Quite Big about NATO by Alan Davidson, a self-deprecating hard-bitten idealist who'd had to live in a pragmatist's armour till he threw it off, spectacularly with this book of his that had the good fortune to be banned.

But it lacks that thrilling page-turningness and weird disparity mixing that one can rely on in a Garry Kilworth tale. And it also lacks the insane brilliance of tossing three books into the air together to make such a class, fearlessly symmetrical, synergistic act.

As a political satire and intrigue, The Sometimes Spurious Travels Through Time and Space of James Ovit has the quality and timelessness, and often, humour, of Antony Jay and Jonathan Lynn’s immortal Yes Minister (Yes, there's a Brexit Special); the added bile of that interstellar traveller Ijon Tichy’s diaries that spanned 30 years of the mortal Stanislaw Lem's life to put to our primitive paper; the added touches of whimsy that remind me of another favourite out-of-this-world diplomat, Henghis Hapthorn, captured in tales by Matthew Hughes.

But Garry Kilworth’s creation is entirely his own, with his own style and such an idiosyncratic and rich well of knowledge, life experience and skills he draws on that often, passages aren’t just fascinating, but rather breathtakingly beautiful, like the rainbows on rotted meat.

"When I was a child there was no need to roam far away from one's home because the world came to your kitchen door...the rag 'n' bone man who would give me a goldfish in a jam jar in exchange for any unwanted items (even jam jars from the kitchen waste)...Until I was ten years old, I had not even visited the next village, two miles away. Then my father died of gangrene of the leg when his scythe sliced away part of his calf. He was drunk at the time, having been drawn into the pub on his way back to the hay cutting after dinner one Saturday. He patched himself up, without washing the wound, and finished his day's work. On finding it did not get better, he again treated himself. We could not afford a visit to the doctor believing it would eventually get better on its own. He didn't want to worry his family over a 'scratch'."

And in all this, there are nuggets throughout of matter-of-fact asides, coming out of the blue like elbow jabs from a spirit.

Oh, and it's a love story, too, cardboard-character free. Outrageous cheek in a political satire, let alone a science fiction whatever.


The worst thing about this unique book is that Garry Kilworth is one of the finest short story writers today, who hasn’t burnt out but should have. He shouldn’t have been able to bring off this ambitious novel, too. But he has. He brings out expectations that he should damn well fulfill.

So, Garry Kilworth, if you can't, supposedly because you slime out by calling yourself just a writer or something equally weasily, get James Ovit to do it: Change the course of history to make the current history we’re all swimming in, fake.
Posted by anna tambour at 3:15 pm 2 comments: