A skeleton in my closet 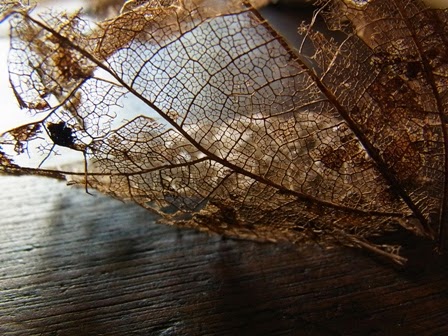 "The Old Testacles", new story in The Cascadia Subduction Zone

Out now, "The Old Testacles", my latest published story, in the October quarterly issue of The Cascadia Subduction Zone published by Aqueduct Press. 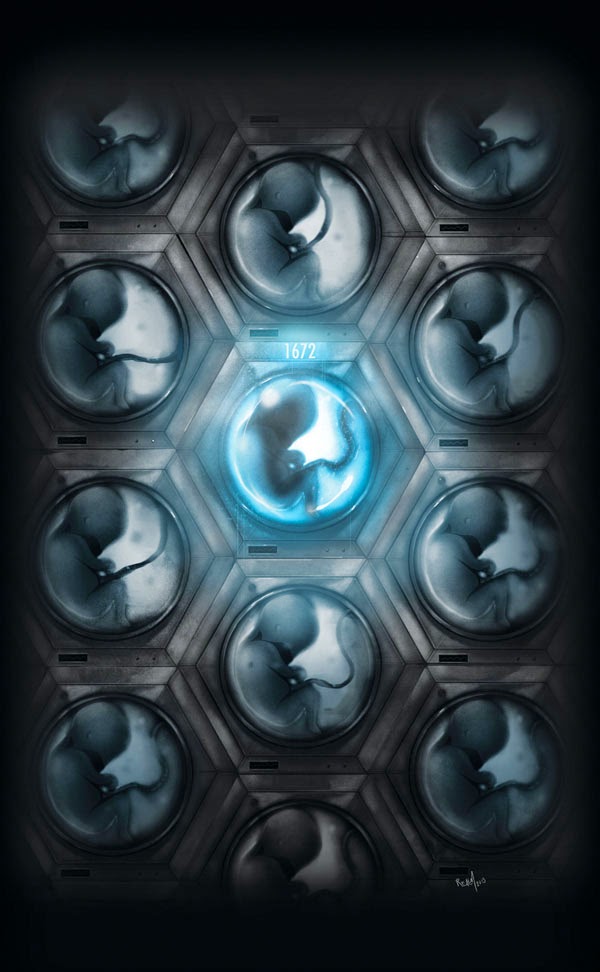 Since this issue has a "Special Focus on Women and the Gaming World" (with pieces by the likes of Marc Laidlaw and Marie Brennan) I must give overflowing thanks to editor L Timmel Duchamp for slipping my story in, because as usual for my stories, it wasn't written to fit anywhere, but it HAD to be written as much as Saki had to write "Toys of Peace" (though I can't pretend to be worth as much as a speck of Saki's dust). If "The Old Testacles" can't be displayed in burning letters that hover over the head of every human on this ball, I'd rather it be published in CSZ than anywhere else. It's an extraordinary quarterly that always breaks its own bounds.
Posted by anna tambour at 1:15 pm No comments:

Outstanding novel - The Iron Wire by Garry Kilworth - a review 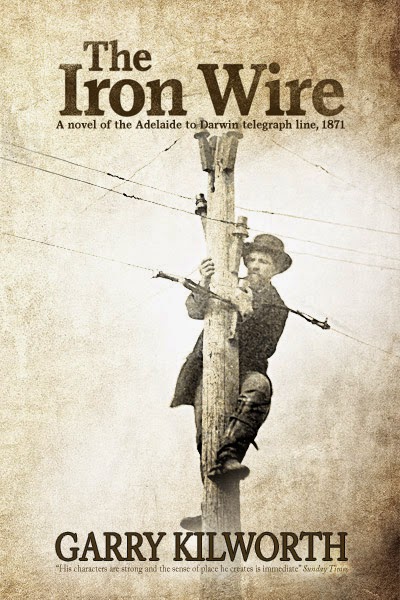 The Overland Telegraph project wasn't just "one of the greatest engineering achievements of the nineteenth century".

It was the most insane. Run a single strand of galvanised wire (on wooden poles that are cut from bush and fashioned along the way — even finding the 36,000 trees would have been a challenge) from Adelaide to Port Darwin in the Northern Territory, a distance of 3178 kilometres.

The very idea was as sane as Telford digging railway tunnels through unsupported beachsand. Even on our own land, keeping an electric line unbroken for 200 metres is an unending task of maintenance — replacing poles that rot, are white-anted, or are pushed over by the brawny forever itchy backsides of cattle. Then there’s fire, flood, storms …

Then there's lightning strike, theft, larrikanism, sabotage, crap wood or no proper trees at all. And that doesn’t take into account the hard yakka of actually building of  line — without a proper drink, and I don’t mean water. Mad! But humanity has never progressed without madness.

A few days ago I finished (I should more properly say ' closed the physical book' because I am in no way finished with thinking about a book that will be a permanent member of my library) The Iron Wire: A novel of the Adelaide to Darwin Telegraph Line, 1871, by Garry Kilworth, about the building of the line, told from the point of view of Alexander McKenzie, a young telegrapher fresh from England.

So many historical novels have implanted drama and romance that feels artificial, but at The Iron Wire’s core is a gripping tale of adventure, hardship, mystery, irrational hate, and romance, by an award-winning writer who specialises in historical novels that span time and geography. So this novel is a great read just for the human story. But the foundations of this particular book are unusually strong: Kilworth’s own experience leading men on clandestine, lonely and dangerous missions, living in places that drive most men barmy, and even  his own trip of 4000 kms through the outback, on a Honda 110.

However, Kilworth captures so much of the mystery, beauty, night terrors, and fascination of the uninhabited Australia that I especially recommend this novel to the vast majority of Australians who would no more venture into the bush than they would, drink a cup of pre-barista International Roast. Kilworth even describes perfectly what that curious creature on the 5 cent piece does when disturbed. He correctly (in my opinion) awards the butcher bird as having the most beautiful avian song. His description of the sky in all weathers and time of day is outstanding, too, coming from such a deep feeling for the land and sky, it oozes out on every page like paint from uncapped tubes.

There are two other absolutely outstanding parts to this novel that I both relish and that awe me with their power.

The first is the love and thrill that comes across, both for this technology, and the beautiful equipment involved.

If you had told me I would be needed as the next King of England, I would have rejected the position. What and who are kings next to men at the heart of progress and science? They are but symbols, while telegraph operators are indispensable.

A personal note here: I was very upset when it was reported that the last telegram was transmitted, the Telegraphic Age to be consigned to history.  I have often bored anyone with ears, with my contention that Morse code is a skill that we all should have learned and that should still be taught. I consider it as valuable as the ability to do arithmetic without a calculator. After all, it's one way to communicate that can go through walls, even of submarines. Also, I admit that I find it  romantic. So the portrayal of this new technology, and of a young geek seduced by it, is intensely charming. Also, the items that capture my interest in a place like the British Museum are exactly this sort of thing, including astrolabes (another discovery to treasure in this novel. along with the relationship between McKenzie and the Afghan camel drivers). I share an attraction to equipment with my father, who tried to get me interested in maths by letting me use his exotic and seductive slide rule. If the spell hadn't been broken every time I was actually in a maths class at school, he might have actually made me into a proper scientist instead of an amateur nature voyeur who is more scared of numbers than I am of snakes (actually, I love snakes). Aspects of The Iron Wire--the joy of discovery and learning, the unbounded faith in science--remind me of my favourite memoir, Oliver Sacks’ Uncle Tungsten.

The Iron Wire could spawn a revival of Morse aficionados, and certainly create many collectors. Kilworth, wouldn’t you know it, is also an expert telegrapher.

Then, the portrayal of the society of men isolated from society, as well as individual characters is superb. It makes this mystery/adventure a sleep-stealer. Once begun, I was done for, in the best way. The pace is beautiful also, making a terrific windup to a bang-up end that reverberates like a dinner bell.

This passage perfectly encapsulates the intense spell that this book casts and its span.

I unwrapped my treasure, and there it was, a camelback KIoB — or Key on Board — a key and a sounder on a block of polished and then varnished cedar wood. Made by Charles Williams of Boston, the brass key was to my eyes absolutely beautiful. The arm of the key had a hump shape in the middle, giving the instrument its ‘camelback’ epithet. I was enchanted with it. With this magic device I would send messages across continents and oceans, between merchants, businessmen, lovers, hunters, explorers, satraps, princes, oligarchs, sheiks, sultans, maharajahs, sea captains officials, generals, politicians, presidents, archbishops and courtroom judges. My key was a narrow brass gateway between the high and mighty of the whole world. They would come to me, a lowly but proficient messenger, to send their request and demands, their offers and rejections, along the singing wires of telegraph road. My key would start and end wars, bring kinds to their knees, raise peasants to dictatorships, bring lovers to the same boudoir, free colonies of their masters.

‘Whaddya got there, mate?’

It was Spanish Joe, observing me from the doorway of the tent.

There are many subthemes in this novel but the one I found most poignant was that of the escape from a farm labourer's life, to become: a geek. I recommend H Rider Haggard's A Farmer's Year, which tells from a surprised gentleman's point of view, that the life of a farm labourer was not exactly conducent to thought. So the relief that McKenzie feels at this escape from bogged-down drudgery is visceral, and reminds me of what must have been my own father's relief and thrill at escaping his fate: to be a bra designer. He threw himself into technology, which happily gripped him back.

Of course, I can’t recommend such a terrific book without giving it a slagging. The lingo of the Aussie-born men in the camp is a bit flat and somewhat inaccurate; not only doesn’t it reflect all the richness of the Australian language at that time, but ‘mate’, for instance, was a product of WWI, and as Steele Rudd wrote, they would have said, not ‘Yeah’, but ‘Yairs’. Perhaps most offending to my ears was the lack of fair dinkum insults and curses — some of the most floridly wonderful accomplishments of Australians’ extempore speech, only recently replaced by the limp, unimaginative monosyllabic f. I fretted about this lack till I realised — remembering a boss who used to say ‘It’ll rot your boots!’ — this stuff is too rich for a tale that has so much going for it already, and so much page-turning urgency, that any veracity in language would only muck it up, pastichify what is a terrific story with (to people who aren’t pedants) terrific dialogue. There are other minor inaccuracies (tea, not coffee, was drunk in offices—and only in tea breaks; back then people weren’t constantly watered). And instead of female file clerks, there were those ubiquitous pimpled youths. The terms used for the peoples whose lands were being trespassed were not ‘Aborigines’ in the late 19th century, but there’s no doing the right thing here. Any decision would be criticised, so I think Kilworth made the right one there, too.

As I was reading and in my memory, I couldn’t help thinking of another author whose books gave me the first thirst for being in the bush, for learning about non-city Australia: the great Arthur Upfield, also an immigrant from England who, like our young narrator, saw Australia and her diversity of inhabitants with eyes filled with wonder, curiosity, and deep attachment.

The Iron Wire: A novel of the Adelaide to Darwin Telegraph Line deserves to take its place amongst Australian classics — and is a ripper of a read, anywhere.

Published by Infinity Plus. Get yours here.