First, a warning: Foul words ahead.
Those shit-spurting dissimulators at Amazon!

Amazon gives new meaning to "It is better to give than to receive".
Now, whenever someone 'gifts' a Kindle book to some unsuspecting person, the Act is an Impertinence. Receiving now, in my case, was like living in a society entirely designed by theorists on Asteroid *. Amazon needs to make sure that when it sends an email directing someone to click and receive, there is a non-graphic link that actually appears in the email, regardless of whether the email is set to accept graphics. And Amazon needs to look at their own Q & A, seeing how circular their nonhelp is. And Amazon needs to also understand that a recipient might not use the same email for Amazon as the gift comes in on. And also, duh, one platform needs to be able to have multiple accounts. In my case, I had to open the mail in the cloud, and eventually learn from some discussion group that to accept the gift that's in a name other than what you use with Amazon, you just log in with Amazon as normal, and put in the code, and you'll receive. If you want to then take that book and read it on your other pc, from my experience, if this was ever discussed in Amazon, the answer was "if our customers (or do they call us 'guests'?) want to do that, they can go fuck themselves."

That said, eventually I was able to download this new collection by Adam Browne, entitled Phantasmagoriana, though, grrr, cutting and pasting some quotes from it is something the Masters don't wish us to be capable of, damn their corporate obtusities! 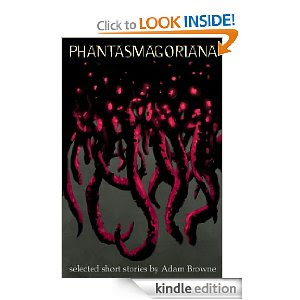 But what about Phantasmagoriana?
This collection has as many tones as a battle between gamelans and bombards.

At first glance, it can seem like an exercise in impressionism, just for the showiness, but that's a false impression. There's a lot of depth here, especially philosophical, quite beautifully (unshowily!) expressed. The collection deserves another title, an original sit-up-and-notice handle equal to the original quirkiness of the stories.

I do have some favourites, of which "Biology …" is first in terms of the message, and "Bladderwrack …" in sheer, pitching-perfect fun, with the added tot of poignancy. (disclaimer: I have a small addiction to 17th and 18th century journals and tales, especially those with sea-legs.)

"A Retrospective" (a long story new to this collection) is a story that should be anthologised, and would fit well in a Strange Attractor publication. Full of cultural richness, this doesn't read as if it's another story of literary mining in exotic lands, but as if the writer hasn't dug this from a pile of media-shit or even a clean screen and shining writing qualifications. It does read as if at least part of the making of this story could have been a tropical boil.

"Heart of Saturday Night", taking place in modern Thailand is citygritty. "The Sun King" is exceedingly playful. But then there's the mischievous "Space Operetta" with its marvelously cheeky opening and its delicious second to last para. But then dammit, "An Account of an Experiment …" is a perfect blend of spot-on period drollery without the pain but with all the irreverent fun that one could see written in the original.

Browne (and the Browne/John Dixon collaboration in "The Laughing Girl of Bora ...") has an incredible ability to squeeze the gist out of a period of time, and place—even one that he makes up. Out of gist, he makes a story that is so smoothly enticing, it is a thrill to be transported, even to places that have so much reeking atmosphere that if there was a lull in the story, a reader could start sniffing the room for mildew or ... and there is so much ("its forces a confoundment", "the beggars drowning in their own karma") that without something to say, this would be another collection of impressionistic cloudskins.

There's a lot of heart in these stories, but nothing prescriptive. These are the stories of someone who has a life and has observed others, an author who has the confidence to stand back and let the stories tell—an author who has the humility to write about somethings other than himself. An author who has the maturity to try different voices and to collaborate at times with others (I first met a story by Adam Browne when I was backrooming editorwise, and so thoroughly enjoyed that "Laughing Girl" Browne/Dixon collab that I asked for private emails so that I could tell them personally). And then later, I stuck up my three or so thumbs pointing to its worthiness here.

And so I heartily like this collection, so much that I will now stick the boot in. Although this Kindle edition is beautifully set, there is something missing—that acknowledgments page that tells where, if anyplace, the stories were previously published. So here is that information (all the stories except one most excellent long story were previously published, but aren't easy to find).
I never expect every story in a collection or anthology to work for me, and only rarely find a collection in which every story does (both of Laird Barron's collections are magnificent exceptions), so I'll state here that three stories in Adam Browne's Phantasmagoriana would mess up the starcount if I were forced to plaster a book with them, as if this were some child's assignment.

Firstly, "Honeymoon" was fatally wounded by the drafting of a Southern General. The authors, who otherwise make a team as powerful as Elizabeth Bear and Sarah Monette, should have fought about this hoary draftee. If they both agreed, then they should be sentenced to a pitcher each of warm syrupy mint julep, chugged on empty stomachs in infernal heat; and then a 20 click run through streets overflowing with more poverty-stricken cliches reaching out to them than Slumcur Zillionaire. Any story that has anyone, General or no, from the Deep South saying "Mah Nellie" should be treated with extreme prejudice, whether that General or- has, as he does in this case, tentacles, or not. It isn't that I am against anyone 'doing' the South, or that I don't think the way people express themselves is fascinating. There's been a sight too much presumptuousness about it, just as there is in, say, depicting any man who lives in Appalachian backwoods as a man itching to use his axe to skin you in your sleep. I object to trying to ride a dead horse. Let it rot! Actually, the American South is a fascinating place, with a plethora of styles of communication. And I speak with some knowledge, as someone who endured painful teasing in Alabama from fellow students and teachers alike, for saying theater with only two syllables. But anything that comes outa yur mouth is funny as hell to someone else. I've been the source of beer-spilling mirth for one word uttered in a bar in Maastricht, and words like water or phrases like dew on the grass can bring strong locals anywhere to tears. And that is just 'English'. Chinese people are too polite to laugh in your face when you ask for anything, but foreigners learn to act like children: show a note written by someone who knows.

Highly recommended
The best story I ever read not just about language, but the ways the subtleties place us and cause us to be more judgmental than God having one of his attacks of the vapours — is "Explanations Are Clear" by L. Timmel Duchamp, in Never at Home, her superbly vigorous collection (that hasn't garnered the following it should, possibly because of the timid cover).

Alice thought of how she called Corinne's parents Marian and Joe. Totally different worlds, yes. Not to mention her mother's dropping the esses on her plurals, and pronouncing her ths like ds or ts, which Alice, conscious of Corinne's foreign ear, noticed as she had almost never done in her life.

In fact, throughout this collection, the issues of language and expression run like blood in an artery. One short paragraph in the muscular but spare should-be-prize-winning "Sadness Ineffable, Desire Ineluctable": 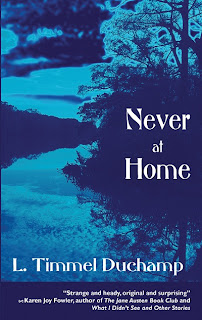 Available in paperback and e-book

Never at Home is an outstanding collection of stories that explore the complexity of relationships in an unusual depth and iridescence. Often very beautiful, but never affected, I hope that this collection gets the prizes it deserves, and I hope that L. Timmel Duchamp is snapped up by another publisher of the highest quality fiction.

But were you itching to get back to the other two stories in Phantasmagoriana that didn't work for me?
The first one and the last—the first, because I think it was going along swimmingly till it briefly literary note-dropped, a wholly unnecessary celebrity appeal—to appeal to the college educated, who know the allusion from the notes (for the allusion is not to something loved, but studied, if ever) and then that dratted airship (not the only gratuitous dirigible in this collection, tut tut!).

And the last story, to me, was too influenced by Borges, who is a bad influence.

And that ends the ramble for today. Usually I proof and rewrite till my brain is reduced to a stub. Today, I'm too bushed. Abject insincere apologies for all my downright mistakes, and garblings.

P.S. Now a few days have passed, enough time that one of those unpleasant how did you miss these jolts just hit me. I wrote above: I never expect every story in a collection or anthology to work for me, and only rarely find a collection in which every story does (both of Laird Barron's collections are magnificent exceptions). But suddenly I want to add two others, both of which hold special places on my shelves. Across Paris, by Marcel Aymé, a collection that astounded me so much that I bought up every title I could by him (all at who-would-want-this-old-thing prices) only to be disappointed. The other consistently astounding and haunting collection, full of believably twisted relationships on all levels, and geographies that can't be GPS'd, is Dagger Key and Other Stories by Lucius Shepard (though the author of the Introduction reminds me of my allergy to plastic watches; every fresh exposure produces greater irritation).
Posted by anna tambour at 4:32 pm