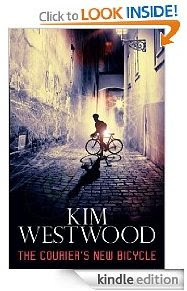 Just posted on the Amazon Kindle edition site, but this posting has added links.

This highly readable, important though not self-consciously Important, novel, deserves a footnote about the cultural context of zealotry, bigotry, and religion-mandated oppression that Kim Westwood paints so well. The story takes place in an eerily recognisable near future, in the lanes and post-Industrial lots of Australia's other big city, Melbourne; though "No one could have predicted what the flu pandemic ten years ago would bring."

Westwood's protagonist, Salisbury Forth, is self-defined as "Genderbent and happy, that's me."—'happy' being as bravura as singing "I'm a lumberjack and I'm OK" in the face of a monster. It's not easy living within the strictures of the new morality laws; and living outside them takes its toll on the body, on friendships and love. But no matter how secure people seem to be, how well-connected or comfortable, they are constantly being tested, and tempted. Loyalty, trust, 'community', personal ambition and biological needs and wants. The nature of societal and personal hypocrisy is beautifully explored, as violent bible-thumpers literally search the streets, looking for transgressors; and black markets thrive. Animals as factories are another theme here. And just when it seems as if PETA is rearing its head to take a chomp out of what is, after all, a page-turner of a mystery story, another great theme gaffs that beast. Zealotry itself is shown in full light, the breathing patient of it, opened up on the table of Westwood's not insensitive scrutiny.

This is a remarkable novel in many ways. It never panders, never sinks to stereotypes, and doesn't flinch. That this takes place in Australia is entirely believable, but for a different reason than if it were set in some city in the USA. Australia has a history of wowserism imposed by a few zealots on the many. The national psyche of Australians is embarrassment at anyone getting their knickers in a knot about anything, except for sport. And as for going to church on Sunday? Are you joking? This is why we get imposed religiosity, because we can't get off our bums enough to object, though we do object, as is shown by every poll. To American readers, the Christians won't seem odd; and this is largely because this type of zealot is an invasive species from the USA.

So with the different themes, including the zen of cycling, this novel is a symphony. The only notes that clanged were ones that often do in any story brave enough to inhabit the future. In a world where even the stock markets have collapsed, gourmet coffee and custom dérailleurs will be cherished memories. As will mobile phones and fashion, unless it's made of rags. But that's my opinion. In the past month I've read recent futures by leading writers that time-proof CNN (something that would have been seen as product placement if it were in film) and in some dump of an interstellar hotel, its owner worried about nuisance suits. So this quibble of mine about details of society that don't wash is a cheap shot that could be aimed at pretty much any speculative future, and not a complaint as much as an invitation to more of us to speculate.

I've given the novel 5 stars because the important themes it covers well are some of the most important issues that we are getting good at avoiding. Furthermore, I think that this novel should be awarded the Tiptree because it embodies everything the Tiptree Prize should stand for: an insistence against being shoved into any gender box. I also think that this novel should be awarded the inaugural Voiceless Writing Prize, not just because it speaks up for animals, but more importantly, because it shows how people who set out to stop others who not only break the law but are immoral (in ways that hurt the common good, not someone's hungry sense of outrage) can not only hurt their own cause by the strength of their passion, but be pounced on by the law for their actions, even as those who acted against the common good, continue in their well-connected ways.
Posted by anna tambour at 1:39 pm