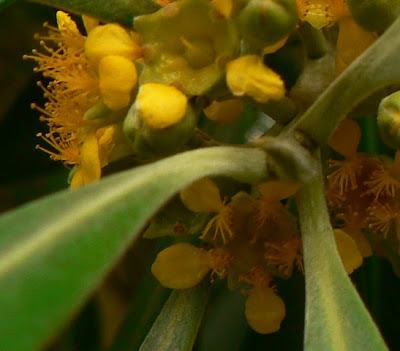 Bearing flowers that would look at home in the sea, 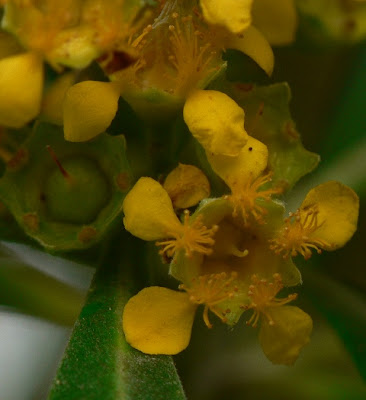 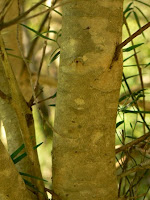 and shiny green leaves, the Tristaniopsis laurina (commonly called Kanooka, Kanuka, or Water Gum) is a small tree that is so beautiful, it has caught the eye of industry and inevitably been tarted up as a coarse, blowsy creature "well suited for use in street tree plantings".

The pictures here are not of Luscious, but of the plant as described in the Australian National Botanical Gardens' site, so informative that I will just say Read: Tristaniopsis laurina.

Not with these protectors! 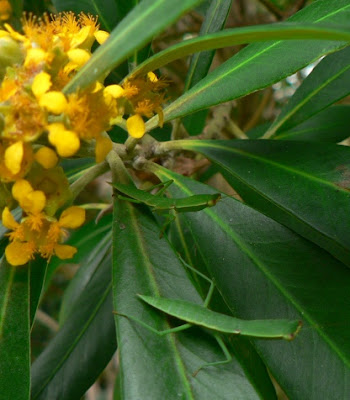 Praying mantis instar nymphs on Tristaniopsis laurina
I could guess, but am not game to specify which species these mantids are, nor whether they're, say, the 4th or 5th instar stage of development.

At the Natural History Museum's restaurant
Waiter! There's a soup in my ministralis.
Sorry sir. We've run out of flies.

For an excellent post on mantids and the difficulties identification pleases to pose, see Gaye from the Hunter's #18 A mantid out of its territory.
And btw, this isn't the first time I've recommended her fascinating blog, Hunter Valley Backyard Nature.

And see the Chew family's Mantids page in their Insects in Brisbane site to find out much more than just about insects in Brisbane. This also gives me a chance to highly recommend their new 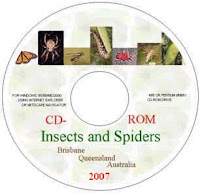 Insects and Spiders CD - Version 2007, and to say again that I think their site is one of the best and most generous on the web.

People like Gaye and the Chews are invaluable explorers.

But getting back to the water gum that is not a gum
Beauty is often beyond the beholder's grasp. If only you could smell these leaves, crush them between your fingers. Their fragrance is what first attracted me to this tree, and it is that scent that leads me to wherever it grows – in dense, shady tangles by a creek, in dips and places where runoff water is sure to reach. It is not a packaged-perfume scent. Far more than that.

The fragrance is what the tropics should smell like on an island combed by a breeze. Pineapple, bergamot, star fruit, camphor, bay, coriander seeds, basil, woodmoss and that delicious and sinuously clad charmer, the salak or snakefruit; with a topnote of a healthy ten-year-old boy.

Although it's related, it doesn't smell like any eucalypt I've met.

Refreshing, invigorating, seductive, and, uh, that description is utterly inadequate. I can't pin its scent down – illusive as fog in the hand. But it's one of those smells that never cloys. It's as lovely and classy as its flowers and the size of its leaves.
Posted by anna tambour at 11:49 am

i love the Chews' website and it's remarkable how many species and genera of arthropods are share between Australia and SEA.

the fragrance sounds good, but i am not too sure about the topnote of a ten-year old...

I wonder how many of those arthopods make it down this far, to southern New South Wales. Though I realise that you are leg-poor, have YOU ever made it this far south, perhaps partway in the belly of a silver bird?

Both you and Brisbane share the blessings of having geckos. I wish they were here, though what do you think of them? Are they part of your life, your sleeping hours?

And I note your reservation about the smell of 10-year-old boys. So I'll ask, do we share a love of durians?

geckos are nice. some stick around for ages too, see http://budak.blogs.com/the_annotated_budak/2006/05/geckos_of_johor.html

My duck has flown down under just once, about two weeks in Victoria 3 years ago.

unfortunately, durians are not in my blood. many would find you good company around here though.