The caterpillar, the afflicted leaf, and sea slugs 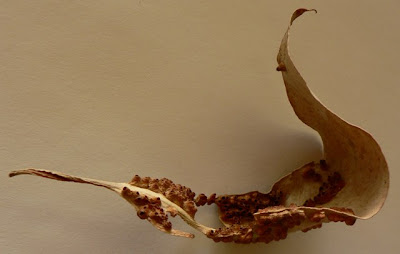 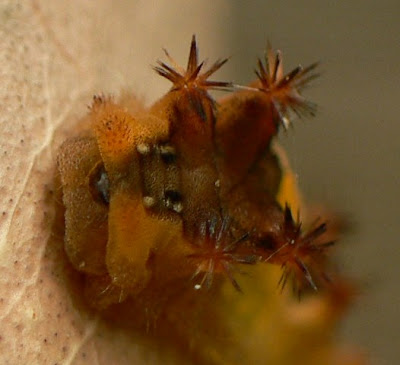 "It looks like a nudibranch," he said. And though it's only a landlubber, it does have that outrageously foudroyant* appeal.

So should sea slugs be called (in our vulgar common parlance) sea caterpillars?

Or, because
1) sea slugs cavorted way before caterpillars (let alone slugs) were even a glimmer in the big He's eye; and
2) since the sea is more what Earth is than land—
should caterpillars be called land (or false, or more modernly: aspirational) nudibranchs?

Whatever it's called, this 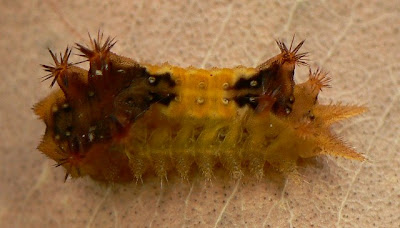 living caterpillar was found on this leaf 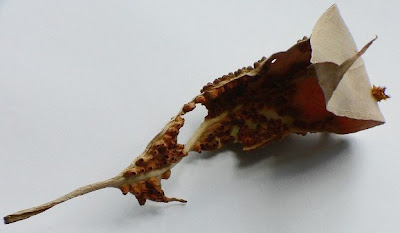 and is, I think, closely related to the powerful cup moth desiccating caterpillar featured earlier this month.

Here's a closeup of the afflicted leaf. 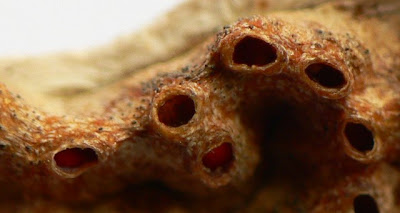 which leads irresistibly to Patti Baugh's "Sea's Candies", and the rest of this site: nudibranch.com.au with splendid photos by Gary Cobb and David Mullins. Wander in the gallery. Stop by the beautiful and informative book, Undersea Jewels: A Colour Guide to the Nudibranch by Gary Cobb and Richard Willan.

Gary is described as a "nudibranch fanatic". But as anyone who's ever read my Virtuous Medlar Circle features knows because they've been launched on an adventure by the invited confession of the great Hans Bertsch: Why I like Nudibranchs — it's impossible to be a fanatic about nudibranchs. To know them is to be besotted. Their colours, shapes, their moves can lead sensible scientists to intemperate language—and if they knew, who knows what passions possible in the hearts of lepidoptera?

* Blame Hans Bertsch for foudroyant
Posted by anna tambour at 11:44 am

but nudibranchs (or is that nudibranches) have more scandalous affairs than cats...

Ooooh, do tell! Have you ever heard Rossini's Cats' Duet? You must! And if you like it, perhaps you can call upon the master wherever he is beyond, to write one for our friends the nudies, as they are called by the most high-uppish scientists in the field, possibly because some of them aren't quite convinced that the way to pronounce nudibranch is nudibrangk. Which makes the plural nudibranchs, just to sort us out.

But all that is nothing to scandal. I'm waiting!

ive never heard them beeing called sea caterpillars only sea slugs, but the word "nudibranch" comes from the Latin nudus, naked, and the Greek brankhia, gills.

By the way those are beautiful pictures!