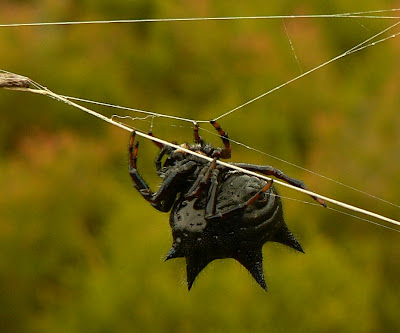 This lovely female looks the picture of what Ron Atkinson of the University of Queensland, in his excellent online Find-a-Spider Guide, calls a 'melanic female' (what makes them melanic?) of the species Austracantha minax, commonly known as the 'spiny', 'Christmas', or 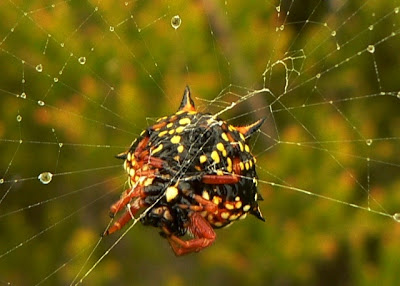 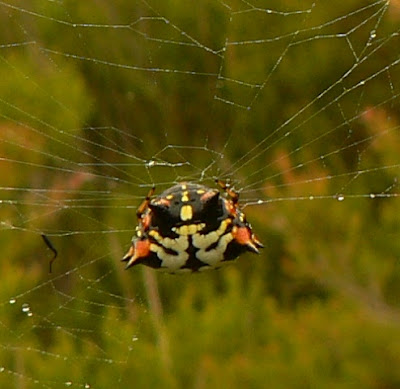 Although it is written that these spiders live in communal groups, as far as I could see, the populace lives not like that in some paradisiacal Leninville, but like people in modern inner-cities. Each spider is busy on her own web, and just as people don't react the same to evangelists at their doors, there is individualism in each spider's attitude to botherers. 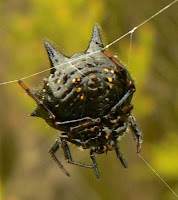 The typical female did nothing when we humans visited till her web was touched, when she ran from the centre of her web to a guy-wire, and waited. But one melanic female surprised us by staying in the centre of her web and vibrating it at the sound of our voices, however quiet. She shook her web till it looked like a waterbed under, say, a dogfight.

Over the past month, this group has been very visible, both the bright and the dark. There were, in early December, about 8 females in a square metre, and then one day in late December there were none. A few days later on an overcast morning there were 8 again (whether they were the same ones as before, I never got to know them well enough to say) just about two metres from their original site, each at the same distance from her neighbour, and each building her new web. 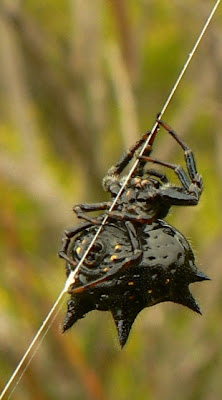 The Austracantha minax does not build a web a day, but every female is keen on doing repairs and has a strong opinion on what thickness each line should be.

The males are pathetically small, and not only did I not see one moving — the only one I saw looked more an uninviting morsel than a male.