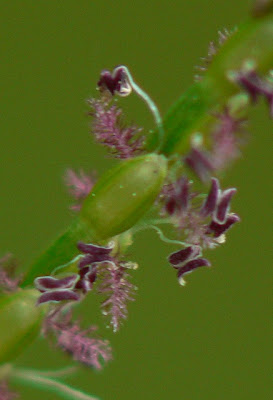 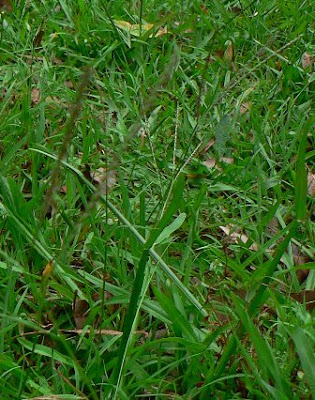 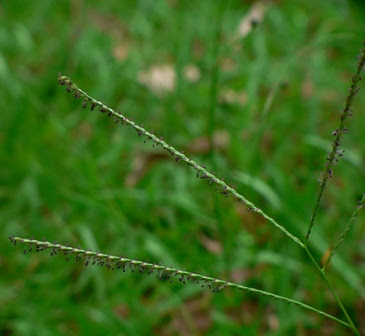 Postscript: Budak has commented, Are these a grass or sedge? I see them here too, and some have loads of aphids on them.

So I have added this picture to show that it is a grass, though I must again parade my ignorance. What type of grass? I can only say expertly that it is a common type (and free of aphids).

I'm sure that anyone who posts pictures like these should have at hand Van Klaphake's Guide to the Grasses of Sydney (Fourth edition). I don't.

But Budak's comment gave me the opportunity to say that the annotated budak is my far-and-away favourite site on the web. It is not only intelligent about the natural world and our species in it, but witty in a way that is never cruel but is so often hilariously true. The thing about Budak is that it doesn't matter which posting one looks at. They are all so delicious. This, from Crab goes *crunch*, is just the latest:

The second specimen he worked on was gravid. Each hack stirred up a juicy splash of yellow roe from the book gills that spilled out onto the rock. The elderly pakcik who purchased the crabs remarked that the portions are prepared with assam pedas to make a meal that rivals the flavour of true crabs. I wanted to tell him that I didn't like the taste of crabs anyway, be they true or false, but my daunted duck thought better of arguing with a guy with a sharp object who probably prefers to mince more than just words.

are these a grass or sedge? I see them here too, and some have loads of aphids on them.

*blush* my mind is not made for such plaudits.... I am curious how you found my little nook though.

After some searching, I think the grass is question is the cosmopolitan "bermuda grass" (Cynodon dactylon).

Because your mind is not made for such, it's a pleasure to shock it. I found you and other wonders, through my favourite circus, Circus of the Spineless.
invertebrates.blogspot.com/

Thank you for searching. I think you are spot on! The "Weeds Australia" site tells more about Cynodon dactylon, known here as 'couch', a naturalised grass not generally considered a weed, though it seems to be listed as one most everywhere. See:
http://www.weeds.org.au/cgi-bin/weedident.cgi?tpl=form.tpl&s=0&region=&form=grass
and
http://www.rbgsyd.nsw.gov.au/science/hot_science_topics/Ecology_of_Cumberland_Plain_Woodland/woodland_plants/cynodon_dactylon
Another site to visit, if you can, is one where you need to take your shoes off. It's the little grass plots at Sydney's Royal Botanic Gardens. Each little rectangle is about two steps long, and you can compare them by stepping from one to another. The Botanic Gardens are, in my opinion, the best in the world, and though these little close-mowed grass plots are like something out of a suburban version of heaven, you can lose yourself in the middle of the palm forest with the fruit bats pendant above, and forget the city exists.

But - *sigh* - we can't watch gorgeous carnivorous plants eat their lunches like you can in your glorious Singapore Botanic Gardens, my next-favourite BT in the world.
http://www.sbg.org.sg/