Just for the beauty of these on this winter's day.

The wombat berry vines are not in their prime now, and these berries are out of season, which made them all the more interesting in a quiet way. This vine rests on a piece of handmade paper that I packed out from Nepal some years ago.

The vines themselves are as tough as wire – and so they were a fanciful but practical base for a garland-tiara that I made for a friend to visit the last Medieval Fest. I wove the vine with its dark green leaves and stems. The jewels set into this crown were sprays of grey-green lichens interspersed with my favourite brilliants: orange bracket fungi, only ones taken from small sticks. They grow prolifically here on the flotsam and jettisoned bits of wood in the local forests as well as on other bits of wood, such as our front steps (till the steps were only bits of wood). Actually, I'm an admirer of all bracket fungi. They have such personality. Some, like the birch bracket fungus have been even used as blade sharpeners.

But they are so decorative that I see that I'm not the only bespoke costumer who is besotted with orange fungi in particular. See what Donna Franklin has made, something that looks ethereal but is earthly in the best way: a dress that grows. It's alive!

Here's a little something picked up today, turned over so you can see its underside where the pores are even more brilliant than the colour on the top of the fungus. As there are several species that grow locally and are often confused, I'm going to imitate the Laetiporus and not commit clapping a name to the species below. 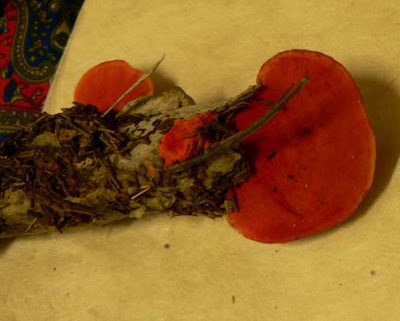 You might want to consult Bill Leithhead's Fungi Pages for great pictures and much information.
Posted by anna tambour at 5:05 pm