Steve Aylett: the cure for scurvy 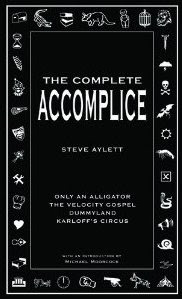 "A camel cannot be impressed."
— Steve Aylett, in The Velocity Gospel

Mental scurvy is rife now. I recommend anything by Aylett as the cure, though even a small dose could cause death from immoderate laughing. Masochists will enjoy their ulcers' liveliness, and people who think "fuck" is a punchline and furthermore, like their fiction smooth and thoughtless will be left clueless, their gums flapping.
This curmudgeon is my favourite living author, and even in his slimmest volume, the best deal per page.

The Complete Accomplice, just released, is a bargain of bargains. 386 pages— all four of the "Accomplice" books (Only an Alligator, The Velocity Gospel, Dummyland, and Karloff's Circus) published by Scar Garden Press in one volume, revised, with an intro by Michael Moorcock, and new Preface.
"Lucifer is a black glove we wear to hide our own fingerprints."
— in Karloff's Circus
I hope that this omnibus is the the first of more to come. In an earlier post, I recommended Lint

and everything that has collected around this character, whose immortal tackiness even seduced me to put an animation on my site. (Lint has a film coming soon, too.)
Aylett never wastes time plastering words on the page to intimidate or provide a cover for no meaning; nor does he remove the fibre and acid from a story till it's genre.

Sure, his books (and comics) are hilarious. But he's got stuff to say. In every page, almost every sentence, he shakes off observations about society like water off a dog that's just rolled in washed-up salmon.

See his site for a load of stuff that is good and bad for your health, including The Caterer.

But before you go there—
"You make more difference to the world emulsioning a wall than you do writing satire."
— Aylett, in The Velocity Gospel
Prove him wrong.
Buy The Complete Accomplice.
Here are some outlets.
Amazon USA
Amazon UK
Amazon France
Posted by anna tambour at 4:30 pm