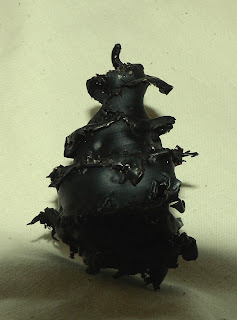 A party snap, thus the bad lighting. I don't care, since every time I look at this moment captured, I can't help smiling at the joy of motion, its spontaneity – not that I can think of anything to say about the dance itself.

Blogging about the process of choreography—Ugh!
3000 steps today
Oddly enough, she compared these bores to writers, I can't imagine why. 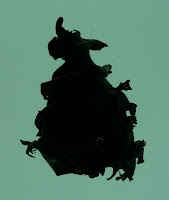 This isn't a real silhouette, which takes great skill. Fine cut-outs, first called silhouettes by snobs with no taste, are an artform perfected in China 700 years ago and kept alive by non-bloggers there. There are many other national and regional styles of cut-out art, from the Polish which looks somewhat like "Pennsylvania Dutch" to the lacy puppets of Indonesia. Paper isn't the only material. Leather and wood have been used, and all of this inspired ironwork, even to, thanks to Napoleon, the gorgeous lacy gold-free iron jewellery called Berlin iron.

This brings me to an artist whose name could be Joy, so much does it suit not only her "work" (Ugh, do I hate that word when related to creations. Oh, Mrs Jones! What a beautiful work. Is it a boy or a girl? ) Ignore that sidestep. I was just getting to the point of recommending the art of Kathleen Jennings. Though I first noticed her spectacularly detailed silhouettes, she has a very nuanced line and shade in all shades of black and white. See, for example, Heavy.

I am keenest on her monochromes because I prefer the emotional directness and depth of shades in darkness and "empty" spaces, or something. I just love India ink, charcoal, pencil in all its hardnesses and edges, the texture and colours of white paper, cutouts and silhouettes. But Jennings is an artist in all colours, for all ages and many tastes. She is unfortunately, over-endowed with talents and skills, being a writer of note too, as well as–I can't go on, as it's too much for one person.

And she does manage, with all this against her, to run a model blog. This is one place where the process is described and it is fascinating, down to boards that aren't boring. This blog inspires and teaches: Its curious name is Errantry.
Posted by anna tambour at 12:11 pm