The glory of unintelligibility

Looking for the sound of angels to help me think, I was pleased to find in the local library CDs, a cover that shows choirboys and says: "Legendary Performance . . . 1963" . . . King's College Choir/Allegri Miserere/ Palestrina Stabat Mater. Whatever.

I took it home and played it, and sure enough, angel music poured forth. Organic, unfiltered, 100% pure and unadulterated Angel Music — every heavenly note. Enchanted, I had to read the CD notes, which are themselves enchanting. Roy Goodman, the soloist, was only 7 then.

On the day that we made the present recording, I had only just finished playing a rugby match an hour or so before the session. I had no time for a proper shower and still had muddy knees under my long trousers . . . when I expressed some personal dissatisfaction with some of my solo verses (Sir David Willcocks, the director) kindly told me that he had tried to preserve one complete live performance rather than contrive a 'perfect' edited version . . . I have lost track of how many discs of the Allegri have found their way to desert islands!

The thought of all these boys sharing this incomparable experience, getting their knees dirty and their minds and hearts filled with thought and examples of kindliness. Well, I was getting downright soppy, angel voices pouring into my ears yet again as I read.

A terrible title, Miserere, but then it is old stuff, and people were dour back then, when the Black Death was fresh in memory. So I read on. There's a translation!

Gregorio Allegri 1582-1652
Have mercy upon me, o God, have mercy
after they great goodness.

According to the multitude of thy mercies,
do away mine offences.

Wash me thoroughly from mine iniquity,
and cleanse me from my sin.

For I acknowledge my faults,
and my sin is ever before me.

Against thee only have I sinned,
and done this evil in thy sight,
that thou mightest be justified in thy saying,
and clear when thou judgest.

Behold I was shapen in wickedness,
and in sin my mother conceived me.

I couldn't read on. I cannot get the image out of my head: boys whose voices had not yet cracked, singing Behold I was shapen in wickedness, and in sin my mother conceived me.

Yet this was 1963, and just a song that is happily unintelligible. Out of curiosity, I looked the words up, and this Miserere is amazingly popular as teaching, particularly that line. An Orange County, California deacon, for instance, features them in a Homily, saying:

A newborn baby or a small child may appear to be innocent, and in no need of God’s grace, but even a baby shares in the rebelliousness of the human race of which it is a part.

And in sin hath my mother conceived me. The image of little boys singing this about their mothers, their parents, the miracle of Life . . .

I'd rather show you this tissue. 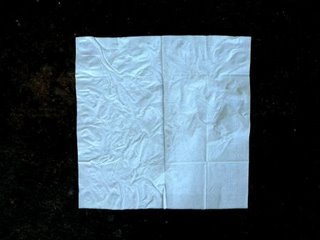 One sixteenth of it is used each day to clean a pair of spectacles, and when all the areas are used, the tissue is assigned to another cleaning job before it joins the rubbish multitude. Now, I use my shirttail, skirt, convenient leaf, a spider eggsack once (excellent, but too humble a use for spider's silk) — anything at hand. He offers me his tissue, offers to clean my glasses for me, but I'm happy in my state of imperfect cleanliness, my disorganised remembrances.

Now to forget the meaning of the words these boys are singing, their voices as fresh now as when poured forth, from the mouths of dirty-kneed little sinners.

Sing on, young angels! Sing on to the glory of unintelligibility.
Posted by anna tambour at 7:49 am

Great post. I think I remember something about this piece of music. At some point after it was composed, it was actually banned from being played or sung because it was considered too sad and too moving. The profundity of the effect on the listeners drove them mad with sorrow. Glad to see that you've survived!