This year, again, it's a Rokewood. The Rokewood tree is a whingeless bearer of many delicious children, often with russetted tops. I love them all, but this child has charmed me more than any other. Just looking at it makes me hungry, but it's also so pawable. There is nothing like a russetting to make an appleskin delicious in texture and taste. A well-russetted apple should feel and look like a Mongolian shepherd's bride's cheek.

A really special apple will be visited by finishing insects in its burgeoning life. Dimpling bugs do a marvellous job, as do click beetles of various types. This apple has had so much work done to it that it is a thing of beauty and a joy to . . . I took some pictures of it just now, and . . . bite by bite, it proved itself to have beauty more than skin deep. Its juice was extraordinary, its flesh noisy. It is the kind of apple that makes apple onomatopoeic.

Would a fruit bat have enjoyed this apple as much? Or a parrot? Parrots usually eat half an apple, and drop it, bored. Fruit bats often fumble fruit. Wallabies eat the whole fruit, but they didn't get this.

This apple met, and exceeded my highest standards. A photo doesn't do it justice, but I'm posting one here, as a tribute. 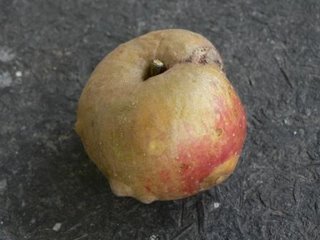 There are other apple trees I've adopted who have more romantic names, as many apple trees do. And some who have surprised me, such as the Irish Peach. I thought her apples would be feisty but they are unusually insipid.

The strangest apples here come from the Fenouillet Gris, a stingy little bearer who puts me in mind of a lady who counts the number of cakes on a plate when she's putting out food for guests. Three-quarters of a bitesize cake for each guest. Is that too much?

Her cakes are so unusual that I can't call her stingy. Each apple is fully russetted. They look like apples of gold, as painted by Rembrandt. Each apple has hardly any sugar in it, but lots of spice. Yes, they do taste like caraway, aniseed, fennel. Once celebrated as dessert fruits, they are so unlike the oversweets that are the common desserts today that they must be wary of modern life, appearing rarely.

Every year, however, the generous Rokewood tree delights everyone who visits her — the insects, at least some of them; the spiders, the magpies and king parrots and rainbow lorikeets, the fruitbats, and the wallabies; and even some two-legs who glean the parrots' and fruit bats' discards from the grass, and need a ladder to reach for apples like this favourite.

Oh, I did forget to tell you why I don't have a picture of any of this year's Fenouillet Gris. The parrots got them, and uncharacteristically, they ate up every one, bloody gourmets.
Posted by anna tambour at 2:22 pm