Discussing the kiwano, the delightfully irreverent Lucy who calls herself a displaced dilettante wrote,

"It said somewhere that it could be used as a centrepiece. The whole idea of centrepieces has always puzzled me; there is never room on our table for all the things we want to eat and drink, and the idea of placing a slightly hostile-looking spiky slug-like thing in the middle of the table to charm one's guests seemed very odd. One chap on a website said he brought one home but his girlfriend didn't want anything to do with it because it reminded her of a caterpillar she was frightened of as a child."

A centrepiece by any spelling
Lucy's opinion of this -piece hit me like a bat to a funny bone, bringing up old guilt that I thought safely buried. Maxine was my head of department, and I was the other person in the department of ordering books. Unfortunately, we were within earshot of the counter, and in a huge, chaotic, mostly-used-books store, people were always asking for a book on . . .

I tried not to, but I couldn't help jumping up and leading them straight to their soulmate, whether it was a tome on raising frogs for profit, or Bulgarian umbrella making, circa 1953. Matchmaking was my passion, and as I was the only one who cared, the owner of the store tolerated my lack of enthusiasm for typing orders, and Maxine—well, she was a good sport. She was quite old (probably 40) and such a nice lady, that one day in the Christmas season, I decided to buy her a present.

Racing around town in my short lunch break (a half hour was the most the owner of the store would tolerate, "for the ladies"), I despaired till, passing the farmer's market on the way back, I saw it, and fell in love at first sight. Maxine had told me of how her extended family was flying in for a feast that she'd already begun preparing, weeks earlier. So when I saw the cauliflower, I knew it was just the thing. The c'piece to beat all -pieces—a talking point for her family that they would never forget. I could hardly carry it. The thing must have had the brainpower of a Cray. It could have held the Pentagon's secrets in one flowerette of its left rigoletto.

As it was heavier than a turkey for 17, I had to stop several times on the way back to the bookstore, just to spell my spine. But when I got back, I presented it to her with all the love I felt for this dear, uncomplaining, motherly superior who had been doing my work for months, while I goofed off and sold book after book to happy seekers of the obscure.

The cauliflower sat on the floor until it was time to go home. No counter was big enough. Maxine's bus stop was a couple of blocks away, and I don't know how far she had to walk when she got off, but when we left the store, her walking one way with it in her arms, and me the other way to my bus, I felt so absolutely wonderful. The joy of giving had mixed with my artistic sense and the vicarious enjoyment of creating a table to remember as well as a feast. I think that Christmas I did what I had at others. Bake a cake and toss it to the pigeons on the roof right next to my apartment window.

Yes, I know I know I should have tossed it to the poor (with a tasteful note—something like Better luck with God loving you next year. Share safely) but I didn't know any the-poor as well as I knew those pigeons.

Sometimes, when I must need a bit of recreational guilt, I'll wake at 3 am, thinking about the cauliflower and Maxine. The only way I get rid of the guilt is to remind myself that, although Maxine was a gracious recipient, she wasn't worth a guilty thought. After all, she and her husband were swingers. Not only that, but she had told me many times, during our eight and a half minutes of afternoon break, of those orgiastic evenings that she and her husband used to spend, square dancing.

Now that I am older and wiser, Lucy's thoughts about the superfluosity of centrepieces spurred me to reprint her words above because they could prevent much suffering. However, there is a place for everything.

When the Centrepiece Does Good

When the food is simply torture
and the people at table equal to the food,
there is always
the
centrepiece. 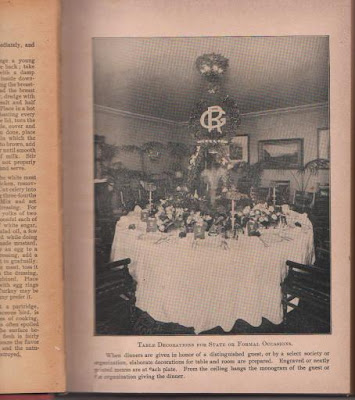 A cauliflower-free centerpiece
Is that a fountain spraying forth in the middle?
The caption reads:

Table Decorations for State or Formal Occasions.
When dinners are given in honor of a distinguished guest, or by a select society or organization, elaborate decorations for table and room are prepared … From the ceiling hangs the monogram of the guest or the organization giving the dinner.

Unmatchmaking
As for the chap whose "girlfriend didn't want anything to do with [the kiwano] because it reminded her of a caterpillar she was frightened of as a child"– my advice to chap: Get another girlfriend or next thing you know, she'll scream at the sight of spaghetti. If only I'd had a camera when those dozen carpet snakes mated that morning just outside the bathroom window …
Posted by anna tambour at 10:46 am

I am quite dumbfounded with delight to have been in any way instrumental in sparking off such a wonderful stream of memory and reflections! I would have been absolutely ravished and enchanted to receive such a gift and centrepiece suggestion as your cauliflower!

And as for The Standard Book of Recipes; and Housewife's Guide, well! I suppose there may have been a point if you invited people who hated each other and you could make sure you put them with the centrepiece hiding them from each other's view...

You enchanted me with your observation, so I must thank you. And that is an idea for a dinner party! It might be the solution for many family annual get-togethers.