In praise of cluttered minds

Spring—the uncleanest time
Since winds bring down so many nests at this time of year, the top layer of the desk gets more layered than usual, 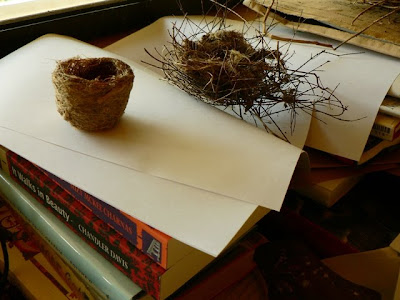 as light brings out the intricacies of woven structures. 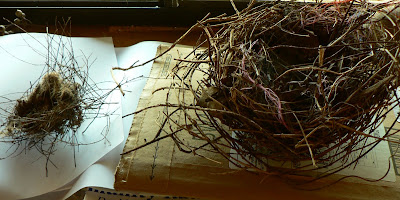 "If a cluttered desk means a cluttered mind, what does an empty desk mean?" is commonly attributed to Einstein, but it might have been said by any slattern. 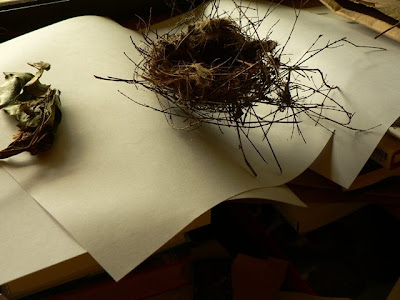 Timmi Duchamp has a marvelously cluttered mind, displayed recently in her essay in Ambling Along the Aqueduct, Birds and memory. Her interest in birds, and in learning more than can be found in books, complement her ponderings over the problems of "discourse in public and in the blogosphere" at a time when extremism and ignorant statements are viewed and encouraged as mainstream argument. In The Politics of Discourse (feminist and otherwise) she says,

One might argue that the reason right-wing extremists are now dominating public discourse is that the news media have decided that right-wing extremism serves the important functions of distorting our sense of the political spectrum and drowning out the conversations we would otherwise be having. Certainly that's how it's working for the larger political picture . . . Countering ridiculous disinformation is an endless treadmill of distraction.

That endless treadmill is something that untold numbers of people have walked away from in disgust. Right-wing extremism rejoices in disinformation and downright lies not just in the US. Rupert Murdoch can take credit for being a global leader in the spread of lies as news, and disinformation as legitimate commentating. It would be good if his role in influencing people and shaping public discourse were exposed for what it is, instead of suffering him to lecture nations on the importance of education. When he says, as he recently did, that US public school education is a failure factory, I agree with him. In Australia, it's even worse. When he says, “The price for the status quo will ultimately be paid by all of us,” I agree with him. Millions of immigrants learn about a country through the media they read and watch. So do children. Murdoch media tries its hardest to shape opinion and mould minds. Its viewsportage has thrown the idea of reportage out the window and eschewed truth in favour of the buck.

As all sensationalist penny dreadful producers have always known, the most sensational lie sells the most, and so goes the public consciousness if that becomes the dominant source of news, opinion, norms. Lies, blessed lies, so nearly 1 in 5 Americans think Obama is a Muslim, and around the world, Murdoch "news" coined the "The Ground Zero Mosque" . Would Murdoch have a different consciousness if he had a cluttered mind—in other words, if he could think past profit? If he could look at the world he is helping to make? I honestly don't know, but when Australians see Americans in power state without blinking an eye, "America has the best health care in the world", jaws drop not just at the audacity, but the breadth of ignorance that allows that statement to be made and taken seriously by the very people most taken advantage of by that lie.

But lies have become the currency of discourse. I had an experience lately. I got on that treadmill to try to show that a pack of lies had been made and grossly misleading assumptions touted as truths, but really, what good did it do? Nothing. The liars just reinforced their own bigotry and displayed even more, agreeing with each other being sufficient to make them feel that they know what they're talking about. Reason? Evidence? So Age of Reason! The most frightening aspect of extremist liars is the attraction they have to keeping their opinions for the sake of having them. They do not experience embarrassment when their lies are exposed because they are so sure that no one will bother to learn, will take the time to actually read or listen to something that might take a bit of thinking beyond base opinion. So they reinforce their own prejudices, labeling away, desecrating all that they can for the joy of their anger. And the result? Unfortunately, ghettos. In the media, online, in electronic communication.

Timmi Duchamp brought up many good questions about public discussion, including these two:
In the public sphere, the lines have been drawn too often, by default—the withdrawal of moderates (and the non-aggressive, non-extrovert communicator) in disgust—the result being that the loudest and extremistissimus overrun the field. There is an added element that is especially relevant today. Discussion, and indeed, most online activity, is more and more: reaction. Discussion to be of any value, needs thoughtfulness and a willingness to learn from evidence and resources exposed in the discussion. This brings me back to the cluttered mind. People like L. Timmel Duchamp, a person who has a greatly cluttered mind, would never consider using a lie as an argument, because, well, Why? If there isn't a good reason to come to some conclusion, it's not time to come to any conclusion at all, but time to continue learning, something we all should consider unfinished till we are.

I'm so glad that Jeff VanderMeer wrote this piece:
L. Timmel Duchamp and Her Excellent Aqueduct Press Celebrate Reaching the 50-Book Mark
It tells so much more than I know.

I do highly recommend the books from Aqueduct Press. 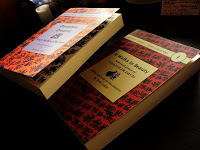 Two from the new numbered Heirloom Series from Aqueduct Press:
The choices made of what to publish in every series at Aqueduct are extraordinary, and more powerful than an oyster knife to an oyster are they in the power to open openable minds.

What I can also say authoritatively is that "It Walks in Beauty" is (although I first thought it about the worst title I'd ever read) one of the best titles ever, really hitting when one reads this milestone of a story (in a great and very unpredictable collection), a milestone we are seeing again. History sometimes seems like a circuit.
Posted by anna tambour at 12:46 pm

A cluttered mind (with some semblance of deep underlying order) is inspiration's workshop. I shall try and find and read Duchamp's work.

Well, damn my disordered mind. I meant to put a link to Duchamp's powerful, beautiful and meaningful fiction--both short stories and novels. "The Apprenticeship of Isabetta di Pietro Cavazzi" is a great place to start. I am thrilled that it features in my Virtuous Medlar Circle. One of her great strengths is an ability to get under the skin of people, to examine the relationships between them as they really are and have been, and when I say 'have been', I mean historically. She is my favourite explorer into other times and the consciousnesses that prevailed as norms and abnorms then.