Perhaps the hardest part, for those brave folks who become Circus of the Spineless ringleaders, is the job they have introducing. Their challenge is our gain, as they surprise every month, perhaps more than they know.

Roger Butterfield has certainly surprised me with his wonderfilled Circus of the Spineless #23. He starts out talking about this summer in the UK, the wettest since records began, and goes on to say a few words about Yorkshire, where he lives:

The garden is crawling with slugs and snails but, apart from a few hardy bumblebees, there is a distinct shortage of flying insects.

How different to here in southeast Australia where we had the first decent wet in many years. Heavy rains brought out an explosion in the moth population. 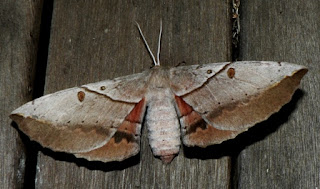 As we don't have curtains in my house, each night our windows were thick with what looked like a vertical rain falling upwards, of fluttering males, interspersed with the relatively still bodies of many females. During the day, moths were thick in the shadows on the verandah floor, and on its wooden rails. 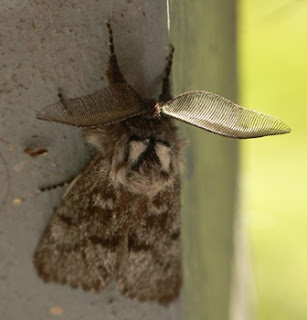 Here are two that had spent the previous evening on the window. The male, when held on the palm of my hand, vibrated.

The female laid those eggs as I was taking the picture of the male, not two metres away. The eggs were not laid near a food plant, as I have read that they should be, nor were they dropped in flight, which seems to be the other acceptable behaviour . They were obviously not attached to anything, but rolled free in the breeze. 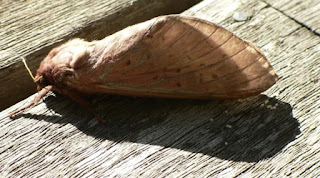 Was she an anarchist?
Should she be reported to
Taxonomists?

After laying her eggs, she flew
away, presumably to die free of the prying lens. The male stayed on the post all day. I lost track of him that evening and never found his body amongst the dead. As for their names, don't trust me further than taking my word for them being of the Lepidopteran order. Are they male and female of the same species? I'm guessing maybe as quite a few species are known for dimorphism. What I'll guess with more certainty, however, is that they don't have a common name.

Common names
Australian moths suffer from a lack of common names, as so little is known of them. Moths in the UK and the USA are distinguished by names so charming, the name itself invites curiosity. Who can resist wanting to know the Why of the Feathered Thorn, the Scalloped Oak, the Cinnabar and the Garden Tiger?

In the case of moths as of so many residents of the world, unfamiliarity breeds contempt.

The more people get to know moths, the more it's inevitable that they will earn common names, even for their other life stages. And though those names might be common and below the notice of certain entomologists, the commons will benefit.

Making Moths Count
I'm all for us having a moth count here, as David Attenborough has urged in his capacity as president of Butterfly Conservation in the UK. Actually, I'm very much in favour of having a moth count, partly because I'm crazy about moths. Butterflies get so much more publicity and image, but I think moths are far more subtle, when they're not more spectacular! Take this, you of the club antennas! 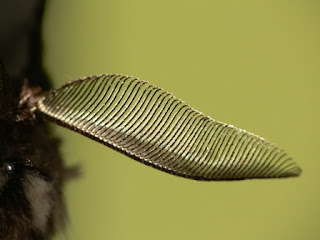 The young and the foolish

From the time the first female ANTHELID varia moth flew onto our verandah, I have had all the help, support and encouragement I could ask for. That has been from home, school and the gentlemen from Sydney and Canberra, not to mention the policeman from next door, who assured me I was quite safe collecting the moth traps from the scrub at 4.a.m.because I was "the only silly fool around at that time".
The children in my class and I will continue our study of moths in our area, as much of the scrub close to our city is being cleared for housing.
I am told Port Lincoln is expected to double in size in the next ten years.
I hope that does not mean the moth population will halve in size.
– Lorraine Jenkins, Moths of the West Coast (South Australia)

Also be sure to see one of my favourite sites on the web, the Chew family's Insects of Brisbane!

Feeding the multitude
Needless to say, the verandah with its daily scatter of dead and dying moths attracted magpies and kookaburras who wouldn't have cared if I'd called their food Hymenoptera, or eggplants.

Anna, I continue to love your entries about creepy-crawlies, fliers, and ocean-going spineless. And your photos are exquisite.

Moths are beauties. But in this wetter climate that I live in, they are also a household pest--making far too many foods inedible with their hatchings. I continue to admire those that don't reside in our pantry, but I confess (hoping that you will someday forgive me) that I set moth traps for the unwelcome kitchen visitors. (The others usually are escorted outside, trapped in an upturned jar.)

Hah, Alice.
I confess that I cannot count the ways when it comes to the inventiveness leeches have put me to in the matter of killing them. Impalement on barbed wire is my favoured method, though I hold them in high regard and consider them beautiful in their way. A leech swaying, upright as a charmed snake in a nineteenth century tall tale, is a character to hold in great respect, especially since no matter how far you walk around that leech, keeping it and its featureless 'face' in view as you pass it, later it will be sure to drop out sated from between your toes when you take off your blood-sopped sock. Maybe it's the racing stripes, or all that time they spend dried up under the ground, planning.

I have always thought leeches resided in pond/lake mud, requiring a wet environment to survive. They live in dry ground as well?

Meanwhile, the 'Moths of Borneo' project has reached Vol. 18... http://www.mothsofborneo.com/

Budak, Your comment is so quotable that I've taken the liberty, on my other site - in my "I hate quotations" section, itself a quotation. I love good quotations and have almost quoted you before.

Those moth pictures are so spectacular that I've put that page in my updated "Irrestibles" list there, too. Thank you for your comments!

Alice, leeches are smarter than I am. Though I've done some nasty but ultimately inconclusive unscientific endurance tests on them (don't tell PETA)they are animals of mystery to me. There can be a very long drought lasting years, yet it is only a matter of weeks when rain finally falls, before leeches are back on their bloodsucking ventures, galloping up mountains and binocularing down dells (sniffing the breeze at least). I highly recommend this fascinating Fact Sheet put out by the Australian Government: http://www.wettropics.gov.au/st/rainforest_explorer/Resources/Documents/factsheets/Leeches.pdf which says in bold italics, "It is difficult to outwit leeches."
And a great site photographed and compiled by Mark E. Siddall and Eugene M. Burreson is Leeches Hirudinea at
http://www.vims.edu/env/research/leeches/leechfigs.html

Be sure to check out this baby there: "Roy Sawyer with an affectionate Haementeria ghilianii".

I would love for anyone who knows authoritatively, to post some lifestyle details here, not necessarily Guinness Records for Annelids, but how long do various leeches live and what can they endure? How do they manage to keep the species going over long droughts; and if there really are over 100 species in Australia, are there any that relish humans especially?

Finally, the skin of a leech has to be tougher than any -ite, and better engineered than any watch part. Has anyone done work on leech skin, and are there many differences in skin between species?