on Trevor J. Hawkeswood, a naturalist's naturalist: Part 1 of 2

30 Jan 2010 — POSTSCRIPT as a preface:
There has been enormous controversy about the scientific rigour of Trevor Hawkeswood and both the integrity and tone of the journal he publishes, so before reading anything by me below, I highly recommend reading The Rogue Taxonomist by Dr. Alex Wild; and then the comments, particularly today's, by "R" in my subsequent posting about Calodema here.

ll, and as I have proved time and again, told what the photo shows, wrongly.

Trevor J. Hawkeswood has been kind enough to correct my latest adventure in misinformation, and I hope he will again, though he causes me all kinds of inconvenience with his intransigence *.

I have many portraits that I never put up here because I don't know what they show. Sometimes I am so entranced by the mystery sitter that, after I think I have done enough research to be accurate, I display the portrait and say it is a ......... Hah! Some amateurs tap people like Hawkeswood as if he were a maple, and he gives generously. But this tree of knowledge has legs. Hawkeswood is often in the field. His life is not one bent over trays of dessicated lepidoptera collected decades ago, but out tramping and crouching in the elements where he can be a part of ever-changing ecosystems, as he is sucked and chewed by the spineless themselves.

Hawkeswood's works are so lively and communicative and so much about the living and so much in the tradition of J.H. Fabre and A.R. Wallace and Thomas Belt and Asher E. Treat and George D. Shafer, and W.J. Dakin, and Mabel and Agnes Brewster and Naomi Crouch, and Bert Brunet, and Densey Clyne (and so unlike that of the CSIRO in, say, their two-volume Insects of Australia: A textbook for students and research workers ) that I recently contacted Dr Hawkeswood saying I wanted to write something about him and his works, and would he mind if I called him a naturalist's naturalist **. He said that since it was good enough for Edward O. Wilson to call himself a naturalist, it was good enough for him. Spiders of Australia: An Introduction to their Classification, Biology and Distribution
Pensoft Publishers, Sofia, Bulgaria

This superb 264-page guide should be in every public library collection in Australia, and on the shelf of every arachnophile. There have been previous guides to Australian spiders such as Densey Clyne's excellent 1969 work, A Guide to Australian Spiders, their collection and identification (see also Ed Niewenhuys' Literature List in his excellent Spiders of Australia site) and there is in print now the Green Guide.

However, I think that Hawkeswood's Spiders of Australia is the most useful guide to date. It is not only written to inform and to fascinate, but is presented in the most intelligent manner of any guidebook bar that other classic Tracks, Scats and Other Traces: A Field Guide to Australian Mammals by Barbara Triggs.

The book is beautiful. The full colour pictures are large enough to be easily seen, but not too large so as to make the book unwieldy. The photographs are just what one looks for, living spiders caught the act of living, not grey and grey photos of pinned specimens as fresh as Tutankhamen.

Before photography became a readily available tool, marine biologists relied upon words and drawings to communicate their observations on living organisms to others. Rapid advances in recent years, particularly in the quality of colour film emulsions . . . have made it possible to obtain first-class photographs of living marine animals in their natural environment. . . . The importance of obtaining a photographic record of living marine invertebrates cannot be overemphasised, since on preservation soft-bodied organisms in particular may become so distorted as to be almost unrecognisable to anyone but an expert.
- David and Jennifer George, Marine Life: An Illustrated Encyclopedia of Invertebrates in the Sea, Rigby Limited, 1979 (out of print and well worth hunting for)

It might seem that I am stuck on baby-talk language and colour photographs, when the truth is that one of my favourite books shows how a book can be written clearly without dumbing down or shying away from proper terminology, and without containing any but the crudest black-and-white line drawings. Brewster, Brewster and Crouch's Life Stories of Australian Insects (Dymocks Book Arcade Limited, 1946) is completely enthralling and utterly informative, and Hawkeswood's Spiders of Australia follows in this tradition (complete with the evidence of almost insanely patient observation) – vivid writing; sensible, accessible organisation of material, and in Spiders, the addition of those colour photographs that help so much (and a few paintings that though not masterpieces, are quite serviceable).

The index in Spiders of Australia is excellent and non-snooty. In contrast the CSIRO's Insects of Australia index might list a common name (don't bother looking up Emperor gum moth) but does not stoop to give the page number. Instead Insects says, for instance, "fruit flies, see Tephritidae".

There is an excellent glossary in Spiders of Australia (unlike the CSIRO's Insects of Australia, which has none). The way entries are cross-referenced in Spiders of Australia makes using the book efficient and a pleasure. The publisher must be commended, as there has been much thought put into the layout of the book, which is superb. Hawkeswood's language is crisp and clear, informative enough to be used by experts but inclusive enough for the book to spark a life-long interest. The use of colour photographs is an intrinsic part of the book, not a teaser on the back like in the CSIRO's Insects of Australia. Although F. Nanninga's drawings and paintings in Insects of Australia are of the highest quality, and in the case of, say, the illustrations "Eggs of Australian Phasmatodea" and "Ants, workers", more informative than photographs, the claim "Colour illustrations" in the CSIRO's book description is bound to disappoint when one is, for instance, trying to identify Lepidoptera. There are. in fact, 8 pages of colour plates in Insects, all by Nanninga, and beautiful paintings of various insects they are, but they are in the style of the 18 pages of colour plates in my Mirriam-Webster Dictionary of 1966, which never said "Color illustrations!" (The reason I am comparing the two books is that their selling blurbs are so similar.

CSIRO Publishing says: Insects of Australia will be an indispensable work of reference for all entomologists, students and naturalists for many years to come.

Pensoft Publishers says: (Spiders of Australia) is aimed for the scientist, naturalist, student and layperson both in Australia and overseas.)

It is my opinion that Spiders of Australia is indispensable at every level of interest. It is even affordable and portable! As for the CSIRO's Insects of Australia, I don't know who the book is truly useful for as each section is not exhaustive enough to be useful to a specialist and yet the whole is, to this reader, almost aggressively not about the living, natural world, and not really usable in the case of people like me who just want to get close to identifying a moth who didn't stand still long enough to have its veins counted. Furthermore, I fear that to the true student, Insects could put them off the study of the living forever, as the language is so dull in most of the sections (which are of varied quality, having different authors). If one of the great books ever written, Asher E. Treat's Mites of Moths and Butterflies could, from the first page to the last, charm a dilettante like me, there is no excuse not to do as good a service to the Kingdom of Insecta. Trevor J. Hawkeswood does a brilliant service to spiders, as he does to everything he studies and writes about.

Like a warrior
A true naturalist is like a warrior. Much time is spent waiting, and if you fall asleep at the wrong time, it can be over before you know it. Spiders of Australia allows anyone to be an armchair naturalist in comfort, with the assurance that the writer knows what he's talking about. One other feature in Hawkeswood's work (reflected in the large annotated reference section) is his passion for accurate citing, and his respect for the early explorers of the natural kingdoms. 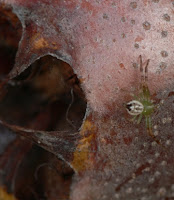 This little "crab spider" (the proper name for the family is Thomisidae) starred in my story "Valley of the Sugars of Salt". Every year she and her sisters make their egg sacks in the calyx of a medlar and you can always see them on guard, though they traverse their globe at the speed of thought. For years she remained nameless, but thanks to Spiders of Australia, I can now get closer to naming her something that I cannot pronounce. Since Hawkeswood gives an excellent description that goes beyond looks, I can now guess with certainty that this spider resembles, but isn't, the Diaea Pilula.

* The problem with Trevor Hawkeswood is not only that he is not available to be tapped for information at the 23:09 call of a mystery cocoon, but that he has refused to allow himself to be zapped with my new Scientist Minimiser, the tool that allows any amateur to compress an expert to the size of a loupe. I promised that I would uncompress him as soon as I had downloaded everything he knows so far, and that the Return command would not impede his field trips and continuing research. Inexplicably intransigent, he refused.

Did I ever tell you how beautiful The Valley of the Sugars of Salt was, and how it still makes me cry?

Well, now you have made me want to know more about spiders. I used to be afraid of them, until I was bitten by a redback, and then I adopted a live-and-let-live attitude. But now I am interested!

No, you didn't, Kathleen, and I'm very happy you think the Valley beautiful, but you know what some there would say if they knew it makes you cry!

What happened when you were bitten by a redback? In that, you certainly know more than most. I've never had the pleasure.