on the Science Fiction Awards Watch 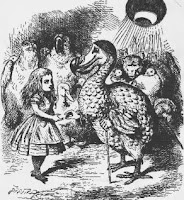 "Well, there are few things that the science fiction community likes to talk about more than awards, so we thought it might be good to have a central place where these conversations can take place."

There are few things I've disliked reading more than the whinge, stab, burn, grizzle and gripe about awards.

It's impractical to hand out bottles of Gripe Water, and there are so many people with so much worthwhile to say, so the
Science Fiction Awards Watch gets a virtual comfit from me.
I'm all for fostering civilized discussion of books (hell, civilised discussion of anything!) in an atmosphere of relative calm.

And hmmm.....There is another reason I like this Watch idea. There is, enough that I have noticed (which means the occurrence is at least sometimes and possibly often) a huge gap between public praise for something and/or someone (and the ensuing raining of awards) and private judgement as expressed in one-to-one, really private discussion. If praise and awards take on a life of their own they develop a sort of flywheel force, with the consequential result (in this world) of great gaseous goops growing, turning into spinning clouds of eartia, which are pretty but ultimately unhealthy for anyone; and when the small ones choke on this, it's not enough to pat them on the back, and impolite to stab them.
Posted by anna tambour at 5:54 pm