Meaning in a universe — a human gut, a sea squirt, an 'undiscovered' 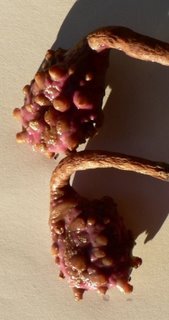 'What we may call the 'lonely hypothesis" — that there is no rational and good God, and probably no God at all, that humankind is a speck of insignificance on the edge of a vast, pointless universe — has its own splendour, inspiration and self-justification. If nothing else will supply meaning in the universe, the existence and achievements of human intellect, creativity and love are quite enough.'
— Richard Koch and Chris Smith, "The fall of reason", New Scientist, 24 June 2006

Let's look at the question of meaning from the standpoint of the Methanobrevibacter smithii.

' "We are superorganisms containing a mixture of not just human cells but also bacterial cells and cells of another microscopic domain of life known as Archaea," says senior author Jeffrey Gordon, M.D., the Dr. Robert J. Glaser Distinguished University Professor. "As adults, the number of these bacterial and archaeal microbial cells exceeds the number of our human cells by tenfold. The genes present in this community of 10-100 trillion bugs vastly outnumber our own genes and are a key part of our genetic landscape, providing us with attributes we have not had to evolve on our own . . . . Buck Samuel, a doctoral student in Gordon's lab, began to probe the influence of Methanobrevibacter smithii, an archaeon. Originally identified in the 1970s and mistaken for a primitive form of bacteria, archaea initially became famous because of their ability to live in extreme environments where nothing else could survive, such as hot springs. Scientists first isolated archaea from the human intestine in 1982, and have recently recognized M. smithii as the most common archaeon in human intestines.'
— Gut microbes' partnership helps body extract energy from food, store it as fat, Science Daily, source: Washington University School of Medicine

But that universe is too close to home (though perhaps I should mention our usefulness to countless others when we die) so let's look for meaning and achievement on a size more suitable to human eyesight — this sea squirt and the world around it. 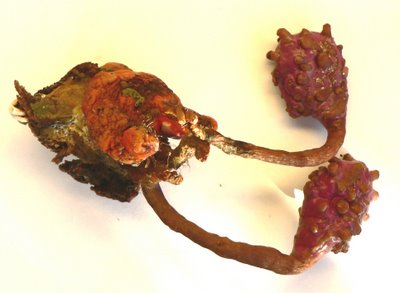 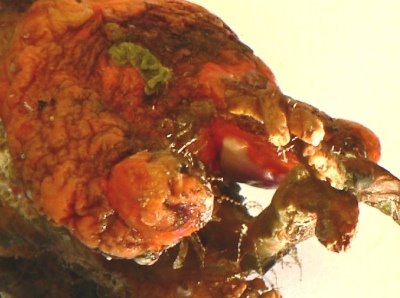 Two days after being washed up on the shore, some of the inhabitants set off 'bravely' or possibly 'with a sense of desperation' or possibly as 'pointlessly' as their infinitely mysterious (to us) lives. Certainly, their movements had a sense of purpose, seen with the naked eye, though the one who throws a tall shadow here is only the size of a drop of water. As for the ones that we can't see, how many more, how complex their lives? 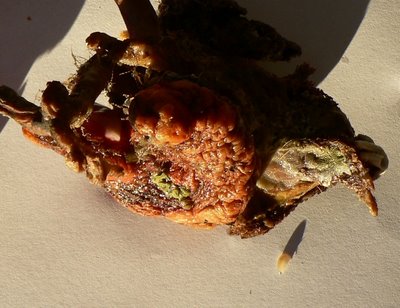 An excellent book, Seldom Seen: Rare Plants of Greater Sydney by Alan Fairley (Reed New Holland, 2004) is filled with descriptions such as this:
'The discovery of this species in 1984 is a good example of the right person in the right place at the right time.'

There are countless species that are 'undiscovered', and if they are waiting to be discovered, their wait gives new meaning to the meaning of 'wallflower'. Isn't the existence of what exists meaning without end? Isn't the wonder of mysteries undelved and if delved, mysterious as ever: infinitely wonderful? Isn't the fact that we have explored the world as thoroughly as a toothpick can span the Grand Canyon, more than enough to give purpose, to thrill, to awe? What a waste of wonder to look, instead, to 'God', let alone make meaning form around us humans, ever us as some centre of the universe— us, His ("I've finally got it!") masterpiece of Art, surrounded by his doodles.

"We like to think of evolution as progressive, but it is entirely possible that creatures with abilities as advanced as ours have come and gone before us."
— Eugene Linden, in The Parrot's Lament and Other True Tales of Animal Intrigue, Intelligence, and Ingenuity
Posted by anna tambour at 1:51 pm

Lovely post (even if most of those photos do gross me out)!