The strength of a mushroom, in any tongue 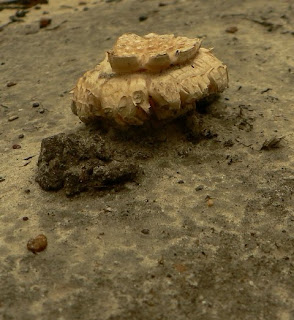 Mushrooms are awful in the old sense. The current trend in unwillingness to compromise, and these mushrooms, remind me of an old haiku of mine that was laid in The Heron's Nest

again negotiations fail
the clay path broken
by a mushroom 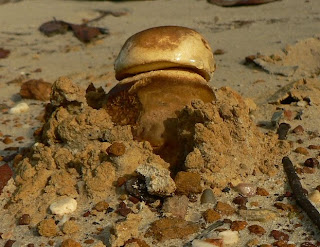 How do you say kookaburra in Russian?
These of mine have been posted on a site in both English and Russian, though I don't know how the translations read in Russian. Like with most poetry that is reprinted, no one asked permission, something that cheesed off Wendy Cope so much, she recently complained in The Guardian.

Even in a haiku, translations vary enormously, each translation a creation. If, for instance, two fabulous writers each of whom plumb depths very differently and idiosyncratically, Vera Nazarian and Ekaterina Sedia, each dug their thumbs into the same poem, story, novel—and translated, I'd love to read both of their creations, though I can only read the English version, and they can translate both ways—English to Russian, Russian to English.

People who can think in more than one language are very odd. They are wealthy beyond imagination, beyond designer handbags and tourist trips to space—but they aren't burdened by the envy normally directed at the rich.
Posted by anna tambour at 9:52 am