"Pokky Man" too gristly to be mash

Mashups are so nice and friendly
for those whose teeth are lost or bendly.

A little mashed fudge bt eggplant goes a long way
The problem with themed anthologies is that in the midst of, say, mashed fudge bt eggplant, one can find something that one would really like, be it endless power without responsibility or a story that you can't consume with drink unless you don't mind choking on your own laughter.

But one is hardly likely to order mashed fudge bt eggplant if one has had enough already of what Tansy Rayner Roberts calls "Relentless Adaptations and Seamonsters and Vampires and a Latte Please". (Her blog piece follows the drollerically passionate story by Roberts, "Relentless Adaptations" that had me bashing a chair arm going Yes Yes Y.... " Listen to the story here or read it in another anthology that you might not pick up because it is themed: Sprawl edited by Alisa Krasnostein. In fact, Sprawl sprawls in fascinating ways, as rivetting as a smashed bottle of milk or an elephant drunk on maroola fruits. Another story in the book,"Sweep" by Simon Brown, should also appear in future horror collections. As deceptively simple as a haiku, and like a needle in I'm sure everyone's spine of guilt. I have a story in this antho too, but that is by the by.)

So if you, like me, feel nauseated by even the thought of 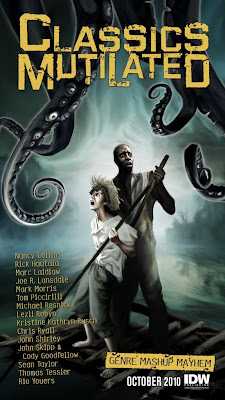 take a deep breath, and order. When you have it before you, trust me as you poke through the mash with pole or finger. Eventually you will come to
"Pokky Man – A Film by Vernor Hertzwig"
—a story so gristly, it leaps the plate. Also, it must have been so much fun to write (and so bloody inspired!) that its own author didn't recognise its worth, and maybe doesn't still. But then as I once heard two editors agree, "authors are the worst judges of their own work". So I'll speak his name here once to get it over with (Marc Laidlaw) and leave him to his ignorance.

"The truth immediately strikes every reader with conviction."
— Captain Gulliver

In our hyperbolic age, the calm reportage in "Pokky Man" is icily refreshing. The "story" is really just a written transcript of a documentary, itself composed of clips. "Pokky Man" reminds me strongly of two classic masterpieces of fly-on-the-wall documentary, Cane Toads–An Unnatural History and Rats in the Ranks. Narrator-free, all of them, and "Pokky Man" has the additional dryness of being music-free, so there is nothing interpretative (some would say manipulative) going on here. Interpretation can, therefore, run riot, as in this reaction to the head rat in Rats...

"While many have said this documentary was Larry Hand's undoing, I think he emerges as the hero; not because he eventually wins the mayoral election, but because it is he who is the most honest about his intentions."

"Pokky Man" as a mashup fails for the same reason that it is great, classic satire. No one knows precisely who inspired Aristophanes to have a character say, "If well paid, these men also teach one how to gain law-suits, whether they be just or not." Maybe Ari time-travelled to now, or laughed over the same truth with Swift; or travelled to the end of our time, for cockroaches won't be the only survivors.

"I am moving away from the Arena, friends, because when this happens, the blast can spread far outside the –WHOA!"

—what immediately popped into my mind was something I thought only some Australians might think. But my household, it seems, was not alone. Widely quoted was the "sick" comment on Air America: "I'm still cheering the fact that some stingray whacked that Aussie pain in the ass Steve Irwin." And if you google " 'Steve Irwin' obnoxious", quite a lot appears, as does " 'Steve Irwin' hero". A Sea Shepherd ship was named after him. Stingrays were murdered and will be hated forever on behalf of Irwin's memory. But then, as a blogger wrote, "There are a significant number of 'Steve Irwin' types in South Africa." Not that all this matching to real-life-or-other-fictional-character matters as regards "Pokky Man" any more than that Shakespeare didn't know from Jets and Sharks.

What matters is that Hemlock Pyne, Crystal Burl, his girlfriend; Vernor Hertzwig, filmmaker; Dr. Jasper Chrysolite, and the rest, all talk and otherwise in their own way, with no cuts or retakes. "Pokky Man" is told completely straight, and as such, is as funny as this quote about the Chapman brothers' art.

Arguably their most ambitious work was 'Hell' (1999), an immense tabletop tableau, peopled with over 30,000 remodelled, 2-inch-high figures, many in Nazi uniform and performing egregious acts of cruelty. The work combined historical, religious and mythic narratives to present an apocalyptic snapshot of the twentieth-century. Tragically this work was destroyed in the MOMART fire in 2004
— White Cube Gallery

Vernor Hertzwig, filmmaker
The childish, even cartoonish aspects of the story, were far from appealing to me, especially as spending time on a hundred or so hours of Pokkypet footage would mean delaying my then-unfunded cinematic paean to those dedicated paleoanthropologists who study human coprolites or fossil feces. But there was an element of treachery and tragedy that lured me to look more carefully at the life and last days of Hemlock Pyne, as well as the amount of money Digito was offering.

"Pokky Man – A Film by Vernor Hertzwig" will, I trust, be included in some great anthologies. (It would have gone well with Thurber when the New Yorker was up to that quality.)

In the meantime, buy Classics Mutilated and congratulate yourself for finding it.


Afters:
I just remembered that, not that he has ever run a restaurant or judged cuisine, but God hates mash.
You might want to read my report, The Wages of Food-Play.
Posted by anna tambour at 11:03 am