A Day in the Life of a Red Ant Guard 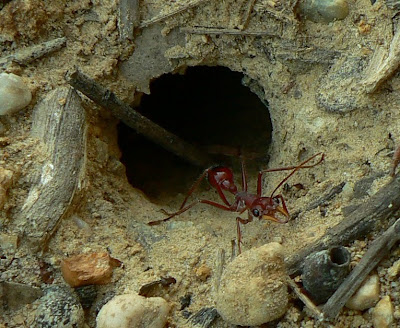 Jammed between skin and socks,
the dead defenders won.

My footfalls die away
and houses hum below.
Up from the tunnels,
new red guards flow.

And the sky did not fall today.

This poem was first published in the July 20, 2001 · Issue 107 of The HMS Beagle: BioMedNet Magazine, now RIP. The Beagle then was the best science magazine I've ever seen and a credit to Elsevier, interfering with genuine work for many readers, most of whom wouldn't know a Myrmecia gulosa from a Nerello Mascalese. The decision to eliminate the poetry, fiction ("scientists don't read fiction") and humour, and to turn the Beagle into a generic trade mag showed a level of survival intelligence, be it hard-wired or learned, that would need gods to to save the species. No gods appeared, but you can enjoy picking through the Beagle Archives.

I frequently suspect that the demise of the magazine industry is an inside job.

Makes me feel like an ant for a moment, I think.

What a vision. Does it comes complete with slaves? And milking?

I'm gender-shifted and am one of the workers. Very busy, discarded chocolate wrapper spotted in sector 8.

I feel for you, but that doesn't mean I want to take your place, especially with all these shifts. In sector 2 there was a riot caused by shiftworkers who were given pheromone replacement therapy. And those slackarses in sector 8! Next it'll be pizza boxes. Keep up the reports when you can.

in solidarity, as long as I don't have to do anything to help