A cure for incuriosity

The condition of incuriosity is making the headlines—and about time, as it is no rare disease. Incuriosity is highly communicable, and often carried by leaders and reporters and teachers. One manifestation of this under-reported affliction (often seen in teachers of aspiring writers) is the urge to state as a fact: "there are only so many stories in the world".

Incuriosity can be cured by getting out in the world, though some cases are stubborn. I once met a young woman who won a trip around the world on an ocean liner. Though she had previously not left Boston, when the ship landed in Australia after 19 days at sea, she stayed aboard because, she said, she was 'bored'. Not surprising. She was quite a bore.

But what a difference an 'r' makes.

This wattle is bored, too. 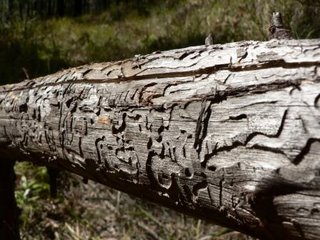 There's a world of difference between a bore and a borer.
Posted by anna tambour at 7:51 pm