Anna Politkovskaya, not fearless at all 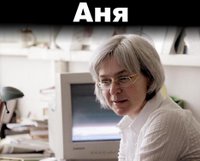 "Internationally admired for her fearless reporting . . ."


Anna Politkovskaya wasn't fearless. "One of the few journalists who had refused to keep her mouth shut", she acted as if giving in to fear was not an option (though her mission was self-imposed), and reported for the common good (though she could have had a comfy existence, 'reporting' the centre of power).

She also had American citizenship and has been compared to Bob Woodward, but there is a stark difference between what and how she reported and the standards she set herself, and the It's all politics. The good of the nation? What's that? embedded journalism in America today, exemplified by Woodward, the New York Times and the Washington Post, who haven't missed a beat in keeping in with the shifting power base. Too often, the 'free press' acts as if it is based in a place like Russia, or the lesser evil but still nothing like 'free' Singapore.

In liberal democracies, it is all about freedom of the press from government; in Singapore, it is about the government’s freedom from the press.- Cherian George, Freedom from the Press: Why the media are the way they are

An article in the Independent said about Politkovskaya, "At a time when the Russian media is falling over itself to fawn over Mr Putin and sustain a Soviet-style cult of personality around him, her work provides a lone dissenting voice and a voice that cannot be heard in Russia - at least outside the pages of her liberal newspaper Novaya Gazeta."

The International Press Institute maintains a 'Watch List'. The Russia Watch List Report makes fascinating reading.
Media bias remains a feature of elections in Russia. The Russian Union of Journalists (RUJ) monitored the lead up to the 2004 presidential elections held on 12 May. The results of the monitoring showed clear evidence of self-censorship and favouritism towards the incumbent president.

Politkovskaya was not unique. There are many like her who are not famous, but who face imprisonment, financial ruin, threats to themselves and their families, and death. But they still report.

International PEN reports about them, and translates books like Anna Politkovskaya's Putin's Russia.

The Committee to Protect Journalists reports about them. Read, for instance, The Enemy, about Al-Jazeera's Sami al-Haj, jailed for five years without charge or trial.

Reporters Without Borders reports about them, and about events that often curiously miss the NEWS. Take for instance, this story in their breaking news today:

The International Press Institute (IPI) is perhaps the most curious group, as the statements they issue are much more informative and hard-hitting than the stuff that is considered fit as 'news'. Read, for instance, their statement: Media Targeted During the Ongoing Middle East Crisis

There are many groups working for press freedom, such as this coalition mentioned in Sri Lankan news.

In 2005, 58 journalists were murdered, and more than 500 were arrested. Journalists' committees are forming in many nations, including that hotbed of non-sensational news, Malta, where the Malta Media reported, "The Committee will be campaigning for a Freedom of Information Act, a Whistleblower Act, an overhaul of the Press Act and libel laws, and plans to organise a national seminar on Freedom of Information this year."

It's not as if there isn't good analysis around. See, for instance, Today, the chaos of US foreign policy goes nuclear, in ePluribus Media. It's just that other stuff makes the 'news'.

I just Google-newsed "Katie Couric" and got 3,180 stories, the top one (Bloomberg) being typical: " Katie Couric has lost almost a third of her viewers since she took over as anchor of ``The CBS Evening News'' and now trails predecessor Bob ..."

The state of the US news is indeed dreadful, though I can't always bring myself to seek out the appalling stuff we're missing when I websurf (mea culpa). Living where you do, you're truly lucky not to have to encounter Katie Couric on the airwaves -- sandwiched between Katie and the loathsome Dan Rather, CBS actually had a decent news anchor for a while, but now it's back to cringing when I turn on CBS while waiting for the 6:30 news out of Phoenix (more comprehensive than the other "local" shows).

PS: that "borer" photo is amazing!