Darlings, you're choking me! Chouchous and chokos gone wild

In French, chouchou is a term of endearment, and this vegetable is also so loved by the French that when they claimed the idyllic Indian Ocean island of Réunion, this versatile cucurbit Sechium edule, known by many names including chayote (squash), christophine (or -ene), merliton (or -leton), chu-chu, (and choko in Australia) was one of several winners that have since, transformed the steep and verdant mountains of the spectacularly up-and-down Réunion. The story goes that the first plants were shipped from Rio de Janeiro to what we now call Réunion Island (it's gone through many names) in 1834. Like the English when they came to Australia, the French thought nothing of keeping the virginity of this new land sacred. And chouchou grows like a weed, even on the steepest slopes, so it made marvelously cheap slave food. Chouchou au gratin is a favourite dish there in both restaurants and at home, and is considered a classic in the Réunion Creole repertoire. But you could gratin cardboard and it would taste divine. 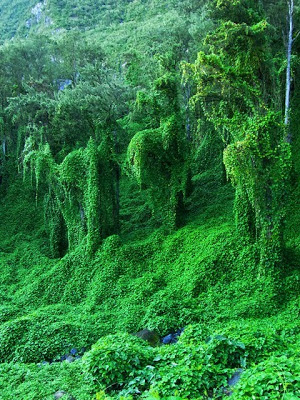 Chouchou is an important agricultural crop, one which was hurt by Cyclone Dumile earlier this month. From the Google translation of the report:


"...The agricultural economy has also been hit hard. In the east, many producers reported losing virtually all of their harvest. Dumile and ended the season of mangoes and farms darlings Salazie are also devastated. Agricultural Chamber of Reunion laments 40 million loss for farmers Reunion."

Chokos, although never exactly popular in Australia, were nevertheless, widely used, mostly to make choko jam but also to boil to grim death. Choko vines were a common lounger on innercity paling fences, dropping their fruits right beside the dunny (outhouse).They are much more expensive now, now that that type of neighbourhood is history. But chokos have never lost their fascination to me. I like to eat them raw, but often leave them to age because they have such personality. That inclination to go wild when no one is looking ... 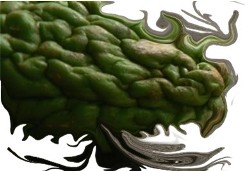 Postscript: 30 January
This portrait I made is for 'Nora, because of her comments below, but to the rest of you, I highly recommend you sidestep over to one of her typically fascinating and intriguingly titled posts, "Spilled coin purse and a flower"—about black-eyed peas and rice, and more. 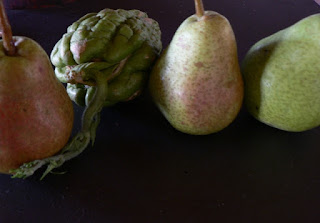 The Judgement of Pears
Posted by anna tambour at 3:08 pm

Ah, lovely. The mirleton (as I know it, and pronounce in citified French as mirl-uh-tahn) or vegetable pear (as some people insist on calling it) is part of the creole tradition in Lousiana, too (the country people of Louisiana say me-lay-taw).

Do you eat them after they've turned to dragons or just admire them?

Tell more! You just whetted the appetite. Do you eat it? And what about the creole way in Louisiana? *Me-lay-taw* is exotic! As for me, they get so much more interesting the older and wrinklier they are, that they often just become models for portraits. And by then, they've also become entwined with some basket handle in the kitchen. Do yours also have little whiskers, as they do seem to get as they age, but also as some types seem to? Any recipes from you? How do you like them?

I think the most common way to cook melaytaw in Louisiana is to stuff them -- with andouille, tasso, shrimp, mudbugs (crawfish to the rest of the world), or some combination of the above. There are also casseroles (with similar ingredients to the stuffed version) and sometimes you find them pickled (with or without green tomatoes). I will see about digging out some recipes.

Those combinations of stuffing and mixing are mouthwatering. But the pickles are the big pull to me, who lives for pickles. (I'll never forget those jars of okra pickles from somewhere in the South that said "Makes your mouth happy". Sure did.) But back to this veg. Recipes! Recipes! Recipes! And I would think this would also make something like that yum 'pickle' that tastes like dessert, watermelon pickle?

You know, I have never tried making 'watermelon' pickle with mirleton, but now I think I must. I do have a good watermelon pickle recipe. I will try to fling some recipes up on the Belfry's kitchen door soon!

And thank you for the Judgement of Pears and the link!

Looking forward to your report(s) on the Belfry!