Review: The Love Machine & other contraptions 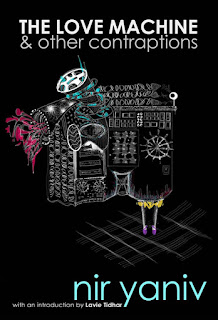 published by infinity plus, December 2012


First, I'm not a reviewer. I'm just saying what I think, in my own words. There's a short version of them and a long ramble. In short, this collection of short stories is: outstanding. Buy more copies than one if you give special books to people you respect.

Want more?
I don’t mean 'outstanding' in relation to other books this year, but in relation to any in any. One feature of this collection is that it has so many tones. This doesn’t mean it is uneven, but good at saying many things and producing many different effects, such as a sudden explosion of laughter, an unkillable urge to get up and check up something in some other book, the Book, no less. Rage, sadness, and above all, thought. These aren’t stories to consume mindlessly, but to savour. Yaniv’s unpretentious fiction has the depth of Gogol and his wryness; in say, “Vegescan” the intelligent playfulness of Stanislaw Lem, and a sense of tragic humour that I can only describe as Ashkenazic; but “A Wizard on the Road”, one of my favourites here, fits Yiddish humour as well as Turkish and Australian. Indeed, it would be as funny in any culture mature enough to make fun of itself. “The Word of God”, however, is quite something else. If it were translated into a wealth of languages and were read by millions, it could do what fiction can sometimes do: change the way people think. I cannot recommend it too highly. This story took great skill to write. Rage always needs to be treated with tough love when harnessing it to a piece of fiction. Yaniv knows his ropes. (To those who, like me, want to stand up and wave “The Word of God”, I also recommend Yann Kerninon’s glorious essay, “Pour une religion du bonhour” in Liberation, January 19, 2004)

Lavie Tidhar’s Introduction is quite helpful. Usually introductions are painful, but Tidhar illuminates. The translating is seamless, though there are several translators—Tidhar for 7 stories, Joe D. Brown for 2, Ido Reif for 1, and Yaniv himself for 7, including the “Contraptions” series, which are flash-fiction-length stories that are interspersed amongst the others, and that interact with the other stories in a way that shows that the collection isn’t an assortment as much as a body of work, with a reason for everything being there and being where it is.

The book published by infinity plus, is well produced technically, with quite an attractive cover and a well-chosen and well-set crisp internal layout. I’ve read this in both paperback and e-edition formats, and they are both smooth. In the whole book, there are maybe 4 typos, all quite minor. A curious inconsistency of ‘grey’ and ‘gray’ is just that: curious. A reader should be so lucky to find many books as well written in “English”.

I’ve only mentioned a few stories, and hesitate to say anything more except, strongly: Buy this book.

The reason I don’t have much more to say about the book as a whole is that I really can’t do reviewer-talk when it comes to technicalities and all the stuff that makes me not want to read a book once it's been exposed to that kind of language. I think that those who know would say, for instance, that “The Story Ends” is an example of a certain kind of fiction, not that it matters to me. But this story made me want to say something non-professional about it, so:

some thoughts about
“The Story Ends”


I was young and foolish and very keen to have the job, which for some reason seemed to me to be glorious in its marginality and fascinating in its monotony.

Starting out with a very funny job interview (to be a slush reader) in which honesty conquers ‘taste’, this charming novella is about the writer as a young man; specifically, his moonlighting for an Israeli science fiction publisher. Heavens Publishing, Inc. owned by Nathan Katzenberg.


“Here’s your desk,” said Katzenberg, this time with his reading glasses on, and pointed to a part of his desk that really didn’t look any different from the rest of it, being covered with papers and ash. An ancient swivel chair had been placed to the side, so that Katzenberg and I would sit in a right angle to each other.

The romance of it all!


Katzenberg pushed a big stack of paper in my direction. “Those are the stories we received last week,” he said. “You can start”
I remember thinking to myself, That’s it. Now you’re a member of the editorial staff of a science fiction and fantasy magazine. And not just any magazine, but the famous Starlight, no less. It was a dream come true.

He quickly learns that most stories are “really not” good. And that even if he thinks something in one might have something in it that works for him, that’s no basis for passing it up the line to Katzenberg.


“Is this your idea of a good idea?” Katzenberg said, and one of his eyebrows rose reproachfully.
Soon enough, Katzenberg says, “Do you consider all of the stories that you’ve read so far to be of an insufficient quality?”
“I . . .” I said.

The story is unforgettable if read only for the relationship between these two. The inscrutable Katzenberg, kind, impatient, and maddeningly skilled, can tell how any story ends when just told a scrap about the beginning. The writer learns how to write, how not to write, and how many stories submitted to the magazine are unoriginal while some that aren’t, are so badly written that they fail as well.
So he gets an idea for a story, “a story-writing software”. Because he makes his living by day as a computer programmer, he knows enough to see that the story has a solid science-fiction basis. But “I suddenly realized: the story-writing software isn’t a story idea—it’s an idea for the real world. And I can write it.”
His motivation is different, but time marches on, so today it’s code, while other writers at other times have been inventive also, for their own reasons. For instance, there was John Kendrick Bangs’ somewhat irascible “Enchanted Typewriter” (a creation that we could only wish were summonable in the ‘real world’ just as we could only wish another of his fictions, true: that all golf courses took up green space only in Hell).

But back to other writers’ wishes to find substitutes for our poor hardwired faculties: that pinwheel of I-can’t-remember who, but I wonder how many writers have constructed one, since this little cheat-spinner is as widely mentioned as Asimov’s unsightly output. And there is the machine that “works on a transistor and ordinary valves” in R.K. Narayan’s The Vendor of Sweets, in which the vendor’s son, scorning the father’s sweet-making business and wishing to get rich quick and be a global player at it, unwraps a parcel to reveal “a small object which looked like a radio cabinet.”


“With this machine,” he tells his old father, “anyone can write a story… I am going to manufacture and sell it in this country…In course of time, every home in the country will possess one and we will produce more stories than any nation in the world. Now we are a little backward. Except for Ramayana and Mahabharata, those old stories, there is no modern writing, whereas in America alone every publishing season ten thousand books are published… Today we have to compete with advanced countries not only in economics and industry, but also in culture.”

Good observers need no machine, Lavie Tidhar has proved that. And so has Nir Yaniv. May his words be translated more and more. And thank you, Lavie, for all your fine work. You’re not only a fine writer, but a generous one. I look forward to reading those works you’ve both collaborated on, too. It would be cruel to have us depend only our imaginations for Retzach Bidyoni (Fictional Murder).
Posted by anna tambour at 3:18 pm