Butterflies are better at foxing 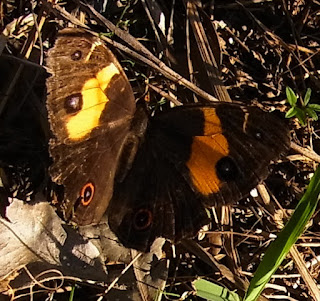 The phrase "to fox" is completely wrong. Butterflies are far more capable. The other day an innocent insect-eating professional was flying like a fool, snapping its beak with a click as resonant as Scrooge's pocketbook. Each time though, that beak was left empty and there probably wasn't much in the bird's stomach, as the butterfly flopped in front of the big sleek hunter as butterflies do: flowsily, dropping between sloppy flaps of its gaudy wings, rather like Isadora Duncan making toast and tea.

The insect was infuriating. Beautifully stupid-looking and utterly insouciant. I could just hear it thinking, "I might look like I'm just alive for looks and don't have a thought in the world, but look at you, so determined, so single-minded. Hunters need glasses if they can't score with passes."

And so, to another truth about these beasts. They "butterfly us" with their names, stage or otherwise. This one might be a Swordgrass brown (Tisiphone abeona) and my name might be Doodls*8hceqauigyhi. I wouldn't stake my next crumb of dry crust on stating definitively anything about its particulars, even what's up with that asymmetrical costume. Whatever the name, not to mention sex, this is an unusually foxy butterflydy flitterer.

You might be interested to know that my camera burped after catching this. It felt so self-satisfied. But cameras are stupid, aren't they? When butterflies invented them, the butterflies programmed the machines for ignorance, so cameras still don't know they are borne to 'capture' butterflies as they pose.
Posted by anna tambour at 1:55 pm