The assumption that we're all tamarindaholics

The festive season is upon us, and food gifts are in our minds.

So it's just terrible, isn't it, that everyone assumes that we all want boxes of tamarind? And that everyone assumes that  tamarind in its many forms and in every recipe, is what we all crave so much that we take it to bed with us and are willing to eat it secretly in the toilet, away from weighing eyes? And moreover, that we all yearn to be told, by experts, that "It's good for you", thereby assuaging our guilt for salivating at the very thought of it?

I find it offensive, too, that we are barraged by reasons to buy and consume tamarind for health reasons, even though the constituents that are effective are only mere traces compared to the bulk of unhealthy matter in the stuff. 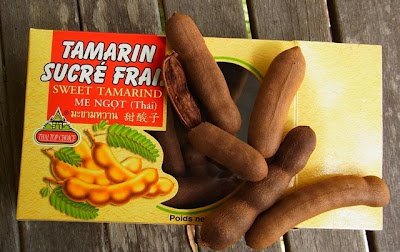 But I do admit, it doesn't matter what form tamarind is sold in: fresh in the pod, scrunched in a block like a block of dates, pureed in a paste, I can't get enough of the stuff. And though no university has funded the study, I can report from my own invention: Mamoul stuffed with (heavy on the T) khajur-imli (I like leaving out the cumin but adding plenty of cardamom and ground nuts [pistachios, almonds, or walnuts]) will make your endorphins' eyes grow limpid with love for you, like a King Charles spaniel's, for liver. That's the truth. But then are you one of the millions who can't bear any more tamarind?
Posted by anna tambour at 12:18 pm