This spider on a printed surface 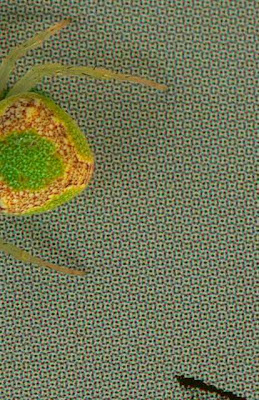 is one of the wasp-preserved that I showed you here a few days ago.

I placed it on the grey cover of The Workers' Paradise, the recently published anthology I wrote about here. 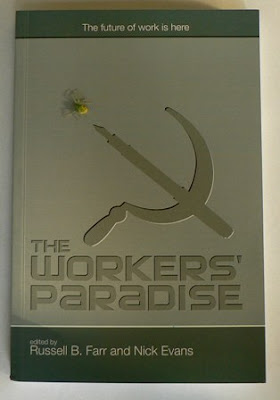 More pictures, taken yesterday, of this food and others chosen by the same wasp. Although now some days old and treated by me, with shaky hand and a pair of tweezers, as roughly as a warfie's forklift to a crate of whisky, they still look remarkably fresh, yet something more . . . 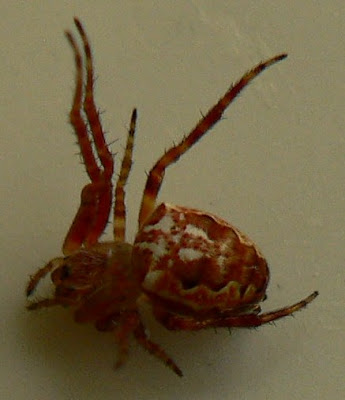 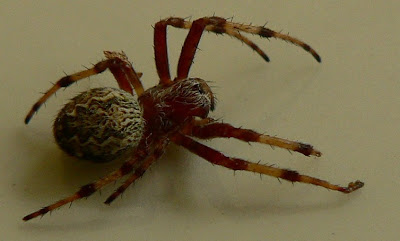 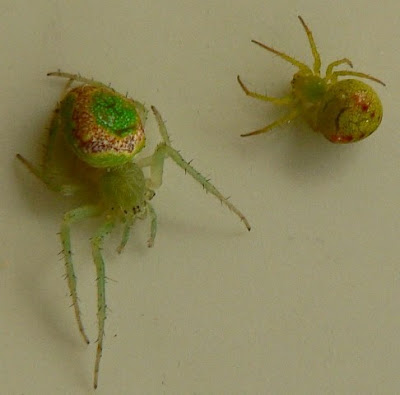 These are only a few of the many tiny spiders pulled from the smashed chambers made by that mud dauber, but each and every spider has one thing in common. They are so beautifully backed (and in many cases, fronted) that carpets less gorgeous have been the cause of murders.

A wasp couldn't be low enough on the intelligence scale to be swayed by packaging?

Or could these spiders be nutritionally superior as well as visually stimulating? If so, the definition of waspish should be changed from the warped "easily annoyed or angered" that more accurately defines our species, which reacts to the presence of wasps with thoughts of kill.

The wasps that filled these chambers were not only industrious to a fault but surprisingly tolerant of this gawking watcher. I have put my face to their backsides while they work, and they don't even change their 'happy' as some wasp-watchers have called it, hmmm.

As for their taste, we can but aspire to such discernment.

But you might like an update on the little wasp grubs in the nest that was not destroyed. Here they are in a photo taken five minutes ago, not so little any more. Sorry about the blurring in the left-hand chamber. The babe is shifting its body as it eats. 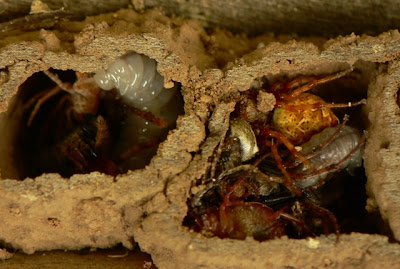 Hello, I'am George. Visit my website, if you want to see New Optical Illusions. Thank's and have a great day.