A few weeks ago an albatross washed up on the beach. Its carcass was mostly eaten clean away, but its huge wings and beautiful head and beak were still intact. I think this one was a juvenile 'shy albatross', but I'm no expert.

Even now, it is hard to write about it because it was an albatross.

During the past week, several of these 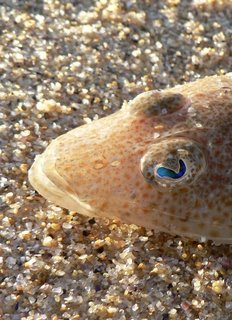 washed up, too. This one was still alive, so it was thrown back. Did it live? I don't know.

It is a flathead, sold commonly in Australia as characterless fillets. Those extraordinary eye coverings are called 'iris lappets' or 'ocular flaps'. The fringe-eye flathead has another type.

Like other fish, its life is measured by cm.
Posted by anna tambour at 8:37 pm