As olde school as Presto Whip and Wonderbra

In The Way We Eat: Olde School, chef Heston Blumenthal gets a great write-up today in the New York Times,

"I had came across a manuscript of Le Viander de Taillevent. He was the chef to the Palais Royal in Paris. I think it was the 14th century.. . .And in there was this wonderful — wonderful? fascinating as opposed to wonderful; it's not the right word — recipe for how to roast a chicken. You take the chicken, and you pluck the chicken while it's still alive, and you baste the skin with a mixture of soya, wheat germ and dripping, I think it was . . ."

Soya? Wheat germ? I think it was as likely that the recipe called for 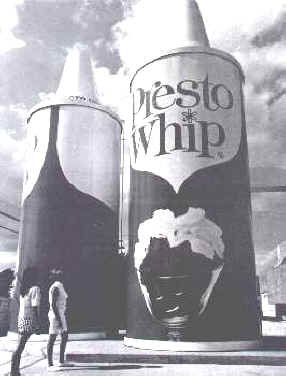 Blumenthal continued his story of the sadistic recipe, but this is one you can trust, as you can with all the recipes posted in Gode Cookery.

James L. Matterer, who runs Gode Cookery, respects history as much as taste (not unusual for a genuine history-oriented foodie). Now, he's worth a column in the New York Times.

btw 1 — Le Viander de Taillevent's recipes have been translated into English and can be found in many publications, and online, in addition to:

btw 2 — The Presto Whip monument photo is courtesy of the delightful online Museum of Soy.
Posted by anna tambour at 8:25 am

I'm not sure why, but this reminded me of a recipe I found in a book about the Roma, BURY ME STANDING: THE GYPSIES AND THEIR JOURNEY by Isabel Fonseca. The recipe was given to her by an old Roma woman who explained that you should always chose the chicken who runs the fastest. After wringing its neck, you encase it, feathers and all, in clay, then place it in a slow fire until the clay is solid. You remove the mass from the fire, take a hammer, and crack it open. The feathers, embedded in the clay, are off, and the result is supposed to be delicious.