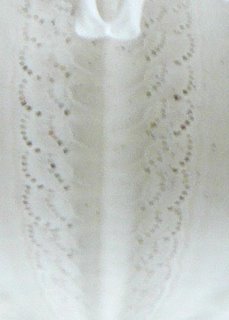 There's no industrial-strength laundry quite like a tumble in the sea followed by a stretch in the sun.

Back in 1859, Mrs. Cornelius wrote in "The Young Housekeeper's Friend": A sailor's red flannels, that have been, during a long voyage, often tied to a rope and towed through the waves, look better and feel softer than those washed at home.

Yet red flannels is not the picture that most readily comes to mind when the sea and sun collude. Even sailors' eyes whiten under prolonged exposure at sea — and sea, sun, and waves make airy froth, that white openwork fabric that skirts every lively seashore.

As the great openworker Don Marquis wrote in "The Cruise of the Jasper B":
A breeze blew in from the bay and stirred his window curtains; 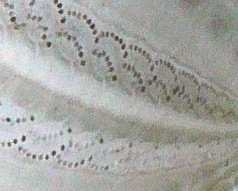 it was salt in his nostrils. . . . And, staring out into the breathing night, he saw a succession of pictures. . . .

Stripped to a pair of cotton trousers, with a dripping cutlass in one hand and a Colt's revolver in the other, an adventurer at the head of a bunch of dogs as desperate as himself fought his way across the reeking decks of a Chinese junk, to close in single combat with a gigantic one-eyed pirate who stood by the helm with a ring of dead men about him and a great two-handed sword upheaved. . . . This adventurer was — Clement J. Cleggett! . . .

Sorry about the content in the second paragraph. I included it so that you could admire his craft, but who wants to have their reading about curtains at a window broken by pirates, Colts, dogs and cutlasses? In his defence, his head might have been turned by the sight of stars in that black night — the reverse of white openworked curtains stirred during the day and night.

There's much that is delicate and stirred by sea, yet the sea itself is careless as a coin-o-matic or a laundress who is treated shoddily.

The sea tears the delicate apart, but as with a scrap of lace that becomes a treasure, the sea makes treasures as its breakers deliver the wash, free for the taking. 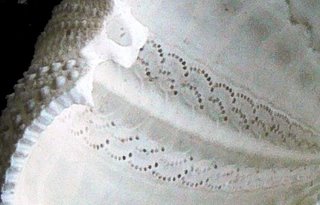 Perhaps that's why sea urchins are found on many beaches. 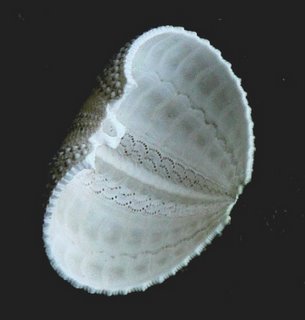 Lovely and a great surprise!

Anna: The shell is beautiful. My grandmother had a room in her house that was like a shell museum. She had ones like in the picture and they reminded me of these white porcelain lamps she somewhere else in the house -- that white with the uniform bumps. Actually I wonder if they'd gotten the idea for the style of the lamps from those sea shells. In any event, thanks for posting those great photos.

Thanks for the comments, Alice, Faren, Vera, and Jeff. What a trip your grandma's house was, Jeff. I wonder if they did get the idea of those bumps on the milk glass from sea urchins.The penchant for bumps on white glass might have been an imitation of something else, a needleworking technique that was mostly nonrepresentational but sometimes inspired by nature (ferns and scallop shells for example), called "candlewicking". It was used for bedspreads and other special items. See
Candlewicked quilt

How wonderful. You caught me by surprise.