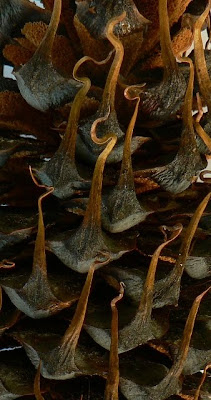 It is a cone! and it's related to a pineAPPLE. It's Australian, and this species, the burrawang (Macrozamia communis) is fairly common in some areas of southern New South Wales, where it grows in dense stands.

The plant fronds of this species are taller than a man, and the cone is long and slightly curved--as long as a big man's tip of finger to elbow, and as thick as a blacksmith's arm.

Here's a good picture of the cone when it looks like a fruit.

The flame-coloured kernels (each as big as Jack and the Bean Stalk's Giant's corncob kernels) look so delicious that the whole plant could have been named "Sirenfruit". Ludwig Leichhardt and his expedition crew certainly learnt to treat cycad kernels with respect. I have seen the kernels of the burrawang nibbled, but the wildlife does seem to give them a wide berth.

"As we passed the Cycas groves, some of the dry fruit was found and tasted by several of my companions, upon whom it acted like a strong emetic, resembling in this particular the fruit of Zamia spiralis, of New South Wales. The natives, at this season, seemed to live principally on the seeds of Pandanus spiralis, and Cycas; but both evidently required much preparation to destroy their deleterious properties..."
- from his journal, a fascinating account of starvation followed by many failures to stomach food that the body finds revolting. Inspiring for all travellers who have stories about their trips that they can never tell anyone. You are not alone!

Cycads are fascinating. The Palm and Cycad Societies of Australia site has many interesting articles online, including this one: Cycad Cone Mathematics