Spies are them. We're lobbyists and consultants

As China knows, in our modern post-ideology world, human spies are soooo last century now that K Street and its imitators around the world run policy so smoothly. In Australia, we don't have a K Street, just a Canberra, Sydney, etc. One lobby in Washington will soon leave the NRA reaching out with their cold dead hands for slippery lobbyists (not that it needs lobbyists now that it's got the Court), so effective is China in hoovering up lobbyists and legislators alike.

Ten years ago, U.S. lawmakers publicly accused the China Ocean Shipping Co. of being a front for espionage and blocked plans to expand its Long Beach, Calif., port terminal over fears that Chinese spies would use it to snoop on the United States.

He's a spy. You're a lobbyist. I'm a consultant.

The FBI said it intercepted a message from SVR's headquarters, Moscow Center, to two of the 10 defendants describing their main mission as "to search and develop ties in policymaking circles in US."
– James Ford, Nearly a Dozen Alleged Russian Spies Arrested in NY, NJ and Cyprus for Inside PolicyMaking Info, Baltimore Sun, June 29. 2010

Mr [Tony] Blair kept his deal with UI Energy Corporation secret for nearly two years after persuading the committee that vets the business appointments of former Ministers that the information was ‘market-sensitive’ . . . The former lobbyist acted as a middleman between potential bidders and a son of the then South Korean president."
– Martin Delgado, Peter Simpson, John Kampfner, Boss of Korean firm that gave Tony Blair secret cash was jailed for briber, Mail Online, 20 March, 2010

So the Russians must be running their "alleged spy ring" for nostalgia's sake. And for this, I thank them. This is so much fun. Reports of the spies are filled with such fraidy-cat text that the newspapers must be printed with hot lead while new articles are being bashed out on typewriters.

Most mornings, according to neighbors, it was the mom, Cynthia, a blonde woman who favored long flowing skirts, who walked up Marquette Street to catch the commuter bus to Manhattan. Or at least that's where everyone assumed she went. – Bob Drogin and Geraldine Baum, Alleged Russian spy ring members led typical American Lives, Los Angeles Times

Until she zipped her human skin off.

And all of this reminds me that I've wanted to recommend to you an absorbing series of books. This is just one of the three volumes that are packed with far more than just pictures. 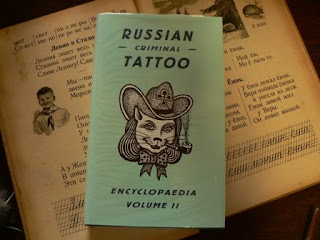