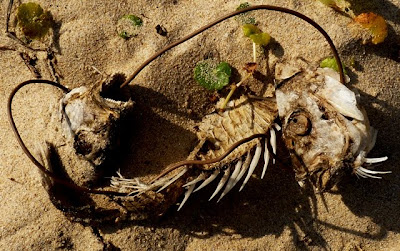 This is worm-fisherman-spotting season, and I'm sorry I missed the w.f. who dropped this homemade amphisbaena, for he used a different worm-catching method than usual (though evidence points to him being an electrician without the wife).

One of Australia's most unusual and least touristed sights, the worm fisherman fascinates me and, by strange coincidence, Angela, co-star of Spotted Lily (my great Australian novel—the only one guaranteed to make you laugh about our censorship laws and to teach you about w.f.'s—or your money lost). I don't know if I would call worm fishing profound, but Angela has pondered.

As Angela explains to the Devil (aka Brett Hartshorn):
‘Do you know Australian ﬁshermen?’

‘Uh?’ He must have been preoccupied, or thinking about the three men, for he wasn’t one to grunt.

‘I didn’t till I visited the coast. They hang out on sandy beaches. Old blokes with bandy legs sticking out of ﬂoppy shorts. They wear knee-high socks in footy team colours, and they keep their shoes on. The ﬁsherman dangles the wife’s nylon stocking in the shallows where waves lap the sand. In the foot of the stocking is rotting ﬁsh.’

‘The old bloke wafts the ﬁsh in its stocking through the shallow water, and just as the waves draw back and all the little holes are exposed in the sand and they bubble and pop dry, he feels something tug at the toe of the stocking. I’ve never done it, but it’s what they say. Anyway, he’s got this pair of long-nose pliers, and he reaches down, and quick as your ﬁngers pulling a string of spaghetti from a boiling pot—’ A ghost of an expression ﬂitted across Brett’s face, so I stopped.

‘Well, the ﬁsherman nips his pliers in between the toe and the sand, and the pliers grab hold of the snout of the worm, he yanks up those pliers in one fast long swoop, and up comes a long worm. Night crawlers, they call them. He puts it in this little case he wears at his waist, and bends over the surf again, waving that stocking. He spends half a day there, sometimes with a mate. All the hours of low tide, catching worms with ﬁsh.’

‘What do they do with them?’

‘I wondered, too. They sell them for beer and smokes.’

NOTE: I admit to leading you astray. The scene tempted me. I don't really think any worm fisher would be daft enough to wave this lot of spines and teeth in the surf if he has ankles. So what probably happened was that an electrician on holiday fished on the beach and caught these, strung them on electric line and filleted them using the line as a convenient hold. Then he just dumped the lot in the sand and in a few days will be home again, far from the pristine beach he likes to visit. Most fishermen clean up their messes and don't leave things like hooks, fishing line, plastic bags and such on the beach—and the ones who fish for worms are the cleanest of the lot. I've never found an abandoned stocking with a rotten fish head in its toe. The worm fisher probably takes it home and puts it in the wife's freezer.
Posted by anna tambour at 3:54 pm