The delights of Daylight Robbery from Blaft

Though I'm not much of a social butterfly, I'd love to carry my emailed invitation to this celebration tomorrow (at the Delhi World Book Fair):

Blaft Publications invites you to the launch of Daylight Robbery by Surender Mohan Pathak, INDIA'S #1 BESTSELLING AUTHOR with 25 million books sold in Hindi over the last 40 years. This is a new English translation, by Sudarshan Purohit, of Pathak's classic 1980 crime novel दिन दहाड़े डकैती. 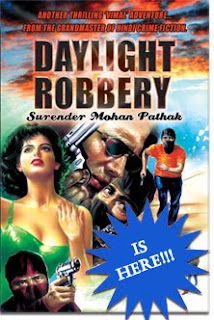 Read Blaft's Inside View
Who?
As Mark Schleffer writes in "Meet India's pulp fiction master" in Global Post, "Pathak remains unheralded, simply because his books are, he says, sold as commodities, not as works of literature or art." Like the l and a, I guess, of another tome by Dan Brown or Rowling, both of whom sell well in India, though they're probably unheralded where Pathak is sought out.
The world is a wonderfully larger place than it might seem if the products of the major publishers and booksellers were our sole suppliers of mental food. Blaft illustrates this beautifully with a quote on its site for Daylight Robbery:

"Surender Mohan Pathak was one of the two people I wanted to be as a kid. The other was Amitabh Bachchan." -Anurag Kashyap

Daylight Robbery is much more fun than a Dan Brown tome (which won't even age well as something you can laugh at) and you don't pay for the pretensions of scholarship with this undark unstudy of an anti-hero, Vimal. This is the second Pathak that Blaft has published in English translation, and both are from the hugely popular series featuring Vimal. See The 65 Lakh Heist (also translated from the Hindi by Sudarshan Purohit).

Like Chandler and some of the other authors in that priceless collection of incorrigibles, Hardboiled: An Anthology of American Crime Stories edited by Bill Pronzoni and Jack Adrian, Pathak's story and telling both work together to aid your escape. If there is sufficient heralding for these translations to get to Western readers, there are even more thrills in store than mere escape. For instance, the opening scene in Daylight Robbery has a bonus that the original Hindi couldn't have delivered. Its description of Vimal disguised "in hippie getup"will make many memories squirm.

It's criminal
At Rs 195 each from Blaft (about $4.20 US dollars), these are a steal; and the site has so much more including The Blaft Anthology of Tamil Pulp Fiction that I recently raved about—so you can be afford to be greedy.

An added mystery
I would like to know the role that translation played when faced with slang, idiom, vernacular, and just plain original style—both in the tone of the narrative and the dialogue. I ask this because of a modestly printed little treasure that's intrigued me for some time—Farewell My Lovely & Stories by Raymond Chandler published by Raduga Publishers, Moscow, 1983. The glossary is a glimpse onto the red scalp of what must have been a violently head-scratching soul. The first item explained for a Russian is "a three-chair barber shop" and the list proceeds like some fantasy thriller, to gems like "The Bible Belt" which takes 5 lines of Russian explanation, "You seem to pick up awful easy" which takes 8, and "Cut out the Pig Latin"—a doozy at 16. "I'll show you my etchings" takes only 5, presumably because the Soviets, of course, had etchings and guys who, as guys do, offered to show them. All of this glossary would be a treat if the Russian translations were translated. Tragically (for ignorant souls like me) the glossary is now a mystery unsolved but pungent. I'm dying to know, for instance, what the 5 lines say for "Hooey Phooey Sing, Long Sing Tung" and the 8 putting Russians right to "Scramola umpchay".
Posted by anna tambour at 12:17 pm