Gorgeous Turner Prize art (for a change) and a private show

The Tate should be congratulated and encouraged, for this year's Turner Prize winner is actually an artist, not just another gimmickist who parties with the right people.

Richard Wright's wall paintings and installations truly are exquisite. They are not just visually resonant, but play off cultural and historical notes instead of cynically take from them like the Chapman brothers, previous Turner winners.

Wright's art is also surprisingly modest. How wonderful to be faced with something small, not another monumental portrait or vandalism on a Christo scale. And it isn't a gimmick that he wants his paintings to be temporary, to be washed off walls, that he sees impermanence as intrinsic to his art.

As Rachel Devine writes in The Times, he wasn't the bookies' fave, but was certainly the public's.

"Traditionally, the Turner Prize is an opportunity for those who question the relevance and merit of contemporary art to indulge their opinion that it’s all rubbish. There’s nothing quite like an unmade bed or a marinated cow to set alarm bells ringing. Expecting to be ridiculed or ignored, Wright considered turning down the nomination altogether." The Art of Shunning Posterity

Now no one who expects the public to fork out $$ for an artist's expressions, and particularly no one who enters a prestigious competition that keeps afloat on a sea of commentary and electronically wafted and permanently catalogued pictures not only of the artist, but the art, can claim to be shunning posterity. But that conceit can't be blamed on the artist, more the spinner of the story.

Not that I agree with all Wright says. "I am interested in placing painting in the situation where it collides with the world; the fragility of that existence. Being here for a short period of time, I feel, heightens the experience of it being here."

His paintings don't collide. They enhance.

And so do these artworks enhance (in the opinion of this impertinent critic who can't go to London to see the current king). Here are only a few pieces from the ongoing impermanent art collection in my gallery at home. 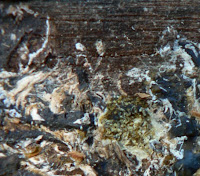 Detail of panoramic diptych
Like Wright's works, these are temporary installations, to be washed off.
And inspired by his example, I call these pieces: Untitled.

With thanks to the Tate Turner Prize for providing the commentary that I have adjusted to suit these works:

The Psittacid Arts Collective creates subtle and exquisite floor paintings that respond directly to the architecture in which they are created. Often awkwardly placed in indiscreet locations, they combine graphic imagery and intricate patterning from sources as varied as a gut, a gust, and a bit of human imagination. 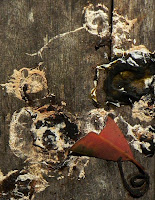 Movements
Some reports say that the PAC belongs to the Incontinent art movement, but this is a lie. Not only are they quite deliberative painters (even the especially prolific Trichoglossus haematodus faction), but all Psittacids spend much time cleaning their tails.

Curator as artist
Curators are often as frustrated as pharmacists. The Collective has given this curator the shining opportunity to put my name also, to this collaborative work.
Shown below is:
A Work in Progress - of Removal 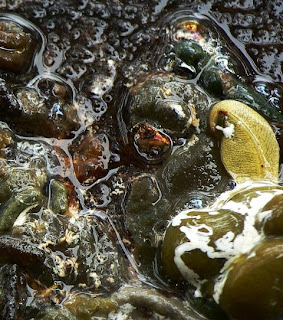